Facebook user Jovis Teo shared a disturbing encounter he had recently while working. Mr Teo, who is a Deliveroo Rider was on the job to deliver an order to a customer at Oxley Residences in the evening on 22nd September. Making his way back to his vehicle after completing his delivery, Mr Teo was confronted by an irate Caucasian man who started shouting vulgarities at him, accusing him of speeding in the condominium compound.

“I was shocked as I did not speed and was not even near them but I kept my cool. Not saying a word to him”, Mr Teo wrote. He then recounted how the man, whose two kids were nearby, snatched up his thermal bag and threw it high into the air, causing in to crash back down to the ground and damaging his phone, portable charger and water bottle.

Mr Teo proceed to argue with the man who continued to taunt him even after he sent his children off with in a taxi with what Mr Teo assumes is his wife. Once the children left and the man continued to harass him, Mr Teo contacted the police.

Unfortunately, they were unable to do anything and advised him to file a civil suit instead.

Responds to the post were clearly on Mr Teo’s side with many users berating the Caucasian man for his behaviour and encouraging Mr Teo to take legal action. 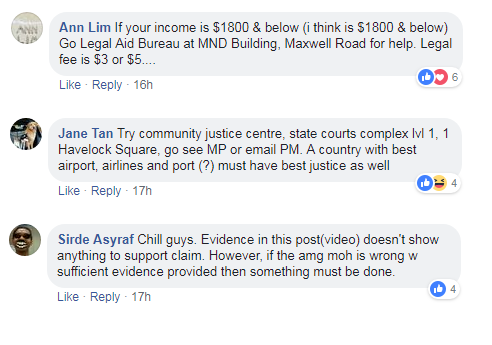