A reader who goes by the name Mr Liew has written to TOC regarding the frequent lift breakdowns at Blk 339A Kang Ching Road.

Mr Liew reported that this is not the first time that such a major malfunction has occurred, and that despite numerous complaints have been made by residents to the Jurong-Clementi Town Council, the problem remains a recurring one, as frequent as “at least once every other week”. 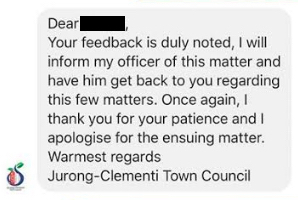 He added that the building is only six years old, and that there are only two lifts serving 20 storeys, with each storey housing 6 units.

Mr Liew lamented that “Every month, we are paying so much, but it seems as though [the town council is] not doing their job.”

He noted the gravity of the fortnightly lift breakdowns, stating that they have been “causing congestion” at the entire block whenever such breakdowns occur.

Mr Liew alleged that the contractors might have used “the cheapest model [for the lift system]” which, from his observation, the lifts are often overwhelmed by its under-capacity in relation to the number of residents at the block.

He added: “I’m sure that other blocks have the same problem. There are 8-10 blocks of BTO [built to order] flats in the area. All built at the same time.”

TOC notes that Mr Liew has written to Deputy Prime Minister and Member of Parliament of Jurong GRC, Mr Tharman Shanmugaratnam, regarding this issue. However, Mr Liew has yet to receive a response from Mr Tharman.

TOC has contacted the Jurong-Clementi Town Council regarding the matter last week, and received the following response:

There has been no update till date.

The problem of recurring lift breakdowns in an HDB estate is not isolated to Blk 339A Kang Ching Road in Jurong.

For specific instances. In 2015, a woman had her hand severed after being caught in a HDB lift. And in 2017, another woman was injured after a lift suddenly dropped.

Update: The town council has responded to TOC and wrote,

Jurong-Clementi Town Council received feedback from Mr Liew on 3 September 2018 that the 5th floor push button of the lift in his block was defective. It was replaced on the same day.

On 11 September evening and 12 September 2018, Mr Liew gave feedback that the lift landing door at the 19th storey was faulty. This was rectified on 12 September.

Our team had hence responded and sought to put the lift back into operation as early as we could in both instances. We had also contacted Mr Liew on 14 September to update him that we had rectified both defects.

Over the past six months, the lift in question (Lift A) failed on three occasions. These were due mainly to the lift doors not being able to open fully, or the lift not responding to a call. During these three instances, the other lift in the block (Lift B) was working and serving all floors. Nonetheless, it causes inconvenience to residents when a lift breaks down, and Mr Liew’s feedback is understandable. We try our best to minimise such occurrences.

Cleaners’ salaries in Singapore to increase from 2023; netizens question the delay and exclusivity