Khaw told the media that forward planning and building ahead of demand are important to ensure that Changi Airport keeps ahead of its rivals.

“Building ahead of demand requires sound judgment. It is not simply ‘build and they will come’. The aviation industry is unpredictable, subject to many disruptions, including oil prices and, at times, unhelpful governmental interventions,” he said.

“Adhering to straight line projections may end up in tears. We must be sensitive to potential disruptions and be ready to make strategic changes promptly when warranted.”

Thanks to the revelation from financial blogger Leong Sze Hian, we now know that Khaw, who was then Health Minister from 2004 to 2011, did not bother to “build ahead of demand” as far as Singaporeans’ healthcare is concerned.

Khaw expects Singaporeans to not fall sick as they age

Indeed, according to an old archived web information from MOH, in 2007, there were only a total of 11,547 hospital beds in 30 hospitals in Singapore (population in Singapore was 4.6 million in 2007):

For unknown reasons, the latest information from MOH website did not show the latest number of hospital beds in Singapore. It only shows the number as at 2014 – 11,230 hospitals beds in 26 hospitals (a reduction from 30 at 2007). Population in Singapore was 5.5 million in 2014:

Putting all these information together, we can see a trend from 2001 to 2014:

In fact, we can see that the number of hospital beds per 1,000 population keeps falling from 2001 to 2014, as population in Singapore increases.

Meanwhile, MOH keeps reducing the total number of hospital beds in Singapore. It’s as if Khaw is expecting Singaporeans to somehow not fall sick and get stronger as they age. 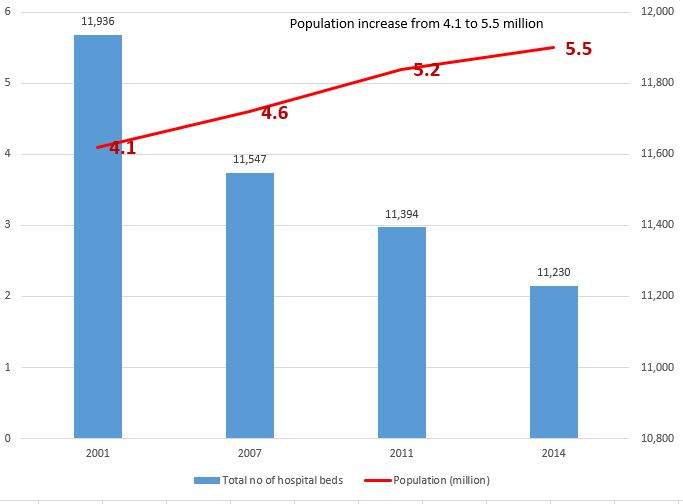