ST Forum: HDB flat as an investment for old age is no longer valid

On Tuesday (3 Apr), the Straits Times published a letter sent in by writer Ronnie Lim, who reported that many seniors who wanted to downgrade to studio apartments were “in a fix as they are unable to sell their old flats”.

“The notion that owning a Housing Board flat is an investment for old age is no longer valid today,” said Mr Lim.

He added that most were hoping to downgrade and live on the profits from selling their flats, but have now become disillusioned.

He attributed the problem to the fact that HDB flats only have 99-year lease and it is made worse by the announcement by National Development Minister Lawrence Wong that not all old HDB flats will be eligible for the Selective En bloc Redevelopment Scheme (Sers). Hence, once the HDB flats reach 99 years, they will have zero value and owners will have to vacate.

“The Government needs to step in to manage this problem and not just leave things to market forces,” Mr Lim urged.

When Goh Chok Tong became Prime Minister in 1990, he introduced the “Asset Enhancement” policy, which helps to enhance the prices of HDB flats.

In fact, just before 2011 General Election, then National Development Minister Mah Bow Tan even said, “We’re proud of the asset enhancement policy. (It) has given almost all Singaporeans a home of their own… that grows in value over time.”

Such reasoning was criticised by Dr. Chee Soon Juan of the Singapore Democratic Policy for two reasons. Firstly, Singaporeans take a bigger gamble when it comes to purchasing properties to the detriment of their retirement funds (i.e. CPF). Secondly, as prices of housing rise, younger Singaporeans have to put off starting a family as the cost of flats put a strain on their finances. 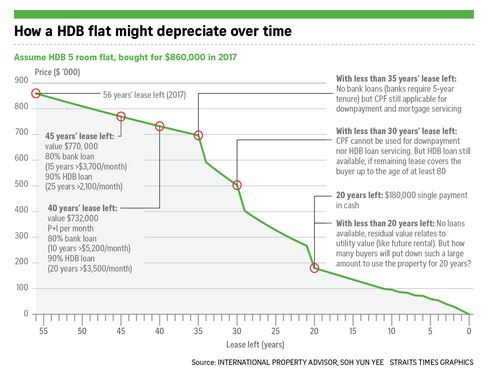 This policy was further questioned when the current Minister for National Development Lawrence Wong said in 2017 that only 4% of flats were redeveloped through Sers since 1995. The vast majority of flats, he noted, will be returned to HDB when their 99-year lease run out without any compensation.

“As the leases run down, especially towards the tail-end, the flat prices will come down correspondingly,” he said. “So buyers need to do their due diligence and be realistic when buying flats with short leases. This is especially important for young couples, who have to plan for a much longer future.”

Hence, what Minister Lawrence Wong said directly contradicted what his predecessor Mah Bow Tan had promised. It appears that the value of HDB flats would not grow over time anymore as the HDB leases run down.

Too much CPF trapped in housing


According to prominent financial blogger Leong Sze Hian, about 75% of our CPF is trapped in housing.

“This is way too high, as compared to only 20% for the United States. This would also explain why from 50 years of age onward, we would only be able to receive 17%-30% of our pre-retirement incomes when we retire,” he said.

So, for most Singaporeans, the other option to fund the retirement would be to downgrade to a smaller flat so as to profit from the difference in pricing.

Last resort: Parents can sue children to get maintenance money for retirement

So, if you don’t have enough money to retire and you can’t sell your HDB flat to downgrade cause its value has already depreciated considerably, what else can you do to get money for retirement?

The PAP government actually enacted the Maintenance of Parents Act in 1994 to enable Singapore residents aged 60 years old and above who are unable to subsist on their own, to claim maintenance from their children who are capable of supporting him or her but are not doing so.

This Act allows the parents to sue their children for lack of maintenance, so as to get monthly allowances or a lump-sum payment from their children.

The Act essentially relieves the Singapore government from the headaches of providing pension to directly help Singaporeans to retire. Other first world countries, of course, do not consider providing pension a “headache” but a responsible thing to do for their elderly citizens.

PrevPreviousPritam Singh announced as new Secretary-General for Workers’ Party
NextSIFA 2018 unveils the full line-up for its film programme – Singular ScreensNext
We have a small favour to ask from our supportive readers. TOC is Singapore’s longest surviving alternative media website and we are attracting new readers everyday. TOC’s independent, investigative journalism takes substantial time, money and hard work to produce. Not to mention the same amount of resources to defend ourselves from the persecution. But we soldier on because we believe in the value of our work and your right to information. TOC is editorially independent. We set out own agenda, free from commercial bias, undue influence from billionaire owners, millionaire politicians or shareholders. If everyone who reads our reporting, who likes it, helps to support it, our future would be much more secure. For as little as USD1 a month or subscribing to us, you can support our work and consequently preserve the sanctity of press freedom. We appreciate your valued help and it means more to us than you can ever imagine!