by The Online Citizen
in Commentaries
8 min read
6

This paper aims to examine the current COE bidding system and how it is way overdue for a review. In addition, this paper will propose some modifications of the bidding system in order to cater to a more environmentally friendly, and socially inclusive society.

The current system of COE bidding is flawed. Whilst it serves its purpose in reducing the car population, it comes at a social and environmental cost. Socially, it penalises the less well-off by making it difficult for them to own a car. This is despite their circumstances being more in need of a vehicle e.g. their families have members who have mobility issues, due to old age or sickness or families with many children. The second is the environmental cost, which limits the shelf life of a car to only ten years. At the end of the ten years, the cost of a new COE to extend the validity of the same car by another ten years is the same as what a new car buyer would pay. Hence, there is no incentive for the existing car owner to renew the COE – he might as well pay for a new car. The current policy of incentivising scrapping or exporting of cars does not help the situation. It must be noted that cars are engineered and manufactured to last more than just ten years. This perceived ten-year cap on the shelf life of cars is not environmental friendly if cars are scrapped after just ten years.

As Singapore progresses as a nation, there are increasing calls for environmentally friendly policies, especially since we are one of the signatories of the Paris Agreement. The review of the current COE framework can take into consideration this aspect. In addition, the rapid economic development of our country has caused some amongst us to fall through the cracks. The modification of the COE framework can make our society a more inclusive one by considering COE allocation to those whose needs for a vehicle far outweighs another who wants a vehicle just because he is capable of owning it.

The changes proposed to the current system can be summarised as below:

i     Additional category for public vehicles

Taxis are considered a form of public transport, and the costs of operating any form of public transportation should be subsidised as they are a public good. Moreover, they are capable of ferrying up to three other passengers each time. Hence, taxis should not be subjected to a similar COE framework as private car owners. Prior to May 1999, this was the case, as taxis were lumped together with cars between 1001 and 1600 cc in Category 2 back then (see Table 1). It is strange that under the current framework, public transport buses have a category of their own (Cat C) whilst taxis, as a public transport is grouped together with the private car population (see Table 2). In the current age of Uber and Grab, it must be noted that taxis refer specifically to metered taxis owned by a taxi company like SMRT, Comfort Delgro, Citycab etc. Private cars used for private hire under Grab or Uber shall still be considered as private cars. The effect of segregating taxis from private cars in a category of their own would drive costs down for traditional taxi operators. In turn, these translate into lower rental costs for taxi drivers, which enables them to compete with ride-sharing companies. More importantly, it hopefully also results in better earnings for taxi drivers. 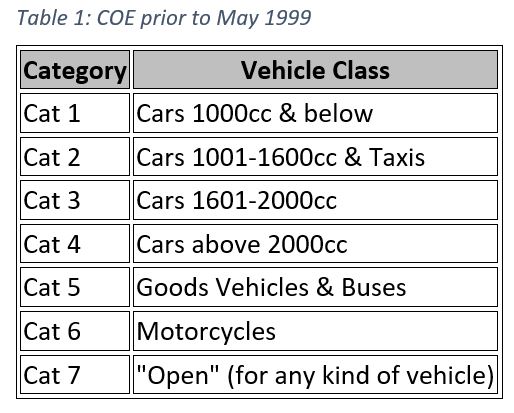 This is the biggest change to the current COE system and is an adaptation of the current flat balloting system that the HDB implements for new flats. In summary, car ownership is pegged to each household. The reason for doing so is because of various reasons:

This is how the proposed system would work. A car buyer goes to a car dealer and expresses his interest to buy a car. The dealer bids in the COE auction on the buyer’s behalf and LTA releases the results of the bidding for each category. This price is the COE base price (BP). Once the COE base price is determined, the allocation system kicks in. This allocation would require sharing of the car owner’s information between HDB, IRAS and LTA. This should not be a difficult task as the civil service is now advocating a WOG (whole of government) approach. The allocation system will now scan the HDB or IRAS database for details of the car buyer and determine his chances of balloting for a car (similar to balloting for a BTO flat)

This model would be more socially inclusive as it takes into account the genuine needs of the car buyer. A car buyer who uses the car to ferry his elderly parents, or his young children has a better chance to win the ballot than a millionaire who just wants to own his 4th car. If the first car buyer wins the ballot, he also pays a lower price for the car because he is maximising its usage and it creates more benefits and utility than the second buyer who is simply collecting cars in his garage. The second buyer’s car would therefore provide no utility other than contributing to the carbon emissions and creating artificial demand for cars. However, in the event that the second buyer wins the ballot, he would also have to fork out a higher COE price. This is the penalty for owning a car than generates no tangible benefits other than for the pleasure and perhaps hobbies of the car owner.

This model of COE balloting also takes into account the 10-year lifespan of a car that has been imposed because of the existing COE framework. Under the current framework, there are no incentives for car owners who choose to renew their COE.

As a result, many of them choose to sell the car and buy a new one. This imposes a perceived 10-year lifespan for a car, which is technically not true as cars are made to last much longer if well-serviced and maintained. Using it only for 10 years is not maximising the lifespan of the car. Moreover, this habit of selling off perfectly good cars after 10 years of usage is not exactly environmentally friendly. It is akin to changing to a new Iphone model after 2 years of usage when it is still working fine. As 2018 has been designated the Year of Climate Action, it is timely to review the COE policies to make sure that our policies are not only socially inclusive but also environmentally conscious.

It must be noted that the numbers and figures quoted are arbitrary and used to illustrate and somewhat exaggerate the differences between a multiple car owner and a family whose circumstances necessitate the ownership of a car. The exact figures have to be determined by LTA after conducting in-depth studies on the car market. They would have to determine the discount on COE that a family with two children is entitled to; similarly, the penalty on the chances and the final COE price a multiple car owner should pay.

With every system, there is bound to be abuse of the system. One of the potential abuses arising from this system is that people will try to capitalise on those who are entitled to the discounted COE under this scheme. For example, a car owner who wants to buy a second car can ‘engage the services’ of a family who is eligible for a car but unable to afford one financially. The family will register for the car, win the ballot and purchase the car and COE at a discounted rate. Shortly after, he can sell the car for a small profit to the car owner who now gets his second car. And car owner achieves this with higher balloting chances and at a discounted COE attributed to the family. The quantum he pays to the family that ballots for the car will probably be less than the penalty of the COE he has to incur if he ballots on his own.

To discourage this practice, one method can be to adopt the same concept as the Minimum Occupation Period (MOP) for new BTO flats, i.e. the car owner who purchases a new COE at a discounted rate as a result of higher balloting chances cannot sell the car for x number of years after the purchase. Car owners who flout this rule (buyers and sellers alike) would be barred from applying new COE for a number of years, in addition to having the car repossessed. Anyone who is found to administer such schemes between potential buyers and sellers would also have to be punished for abuse of the scheme.

The long-term effects on the car ownership landscape is that there will be better utilisation of cars, i.e. cars will be used by more families rather than lone drivers. This maximises the utility of the car, whose benefit is enjoyed by four persons instead of one for almost the same fuel used. Coupled with the incentivisation of renewing COEs, cars will be used for a longer lifetime instead of just ten years. All this adds up to reduce demand for cars.

This has the knock off effect of reducing wastage since cars are used much longer than ten years and also will reduce the prices of COEs for new cars. The beneficiaries of this model are the families and those with elderly or disabled persons. It allows the affordability and opportunity over someone else whose need for the car is significantly lesser. This results in a more socially inclusive society.

Moreover, Singapore is facing a greying population and this review of the model is timely to address the social needs of our current society. The model also penalises those who own more than one car per household. The utility for such cars is extremely low compared to an MPV who is enjoyed by a multi generation family. In the long run, it discourages car collection, or the mindset that one can easily trade wealth for car ownership. A car owner may still be able to do so, but it comes at increasing costs.

The archaic COE framework is due for a revision since its inception in 1990. The model has remained the same for more than 27 years with only minor tweaks to the definitions of the different car categories. The demographics, wealth, and priorities of our society have evolved beyond recognition but the COE framework has not changed. This model addresses the many criticisms and flaws of the current system.