The SMRT facebook fanpage went to the defence of its Chief Executive Officer, Desmond Kuek with a seemingly emotional Facebook post last evening in denial over contents contained within an online post that has been circulating online. 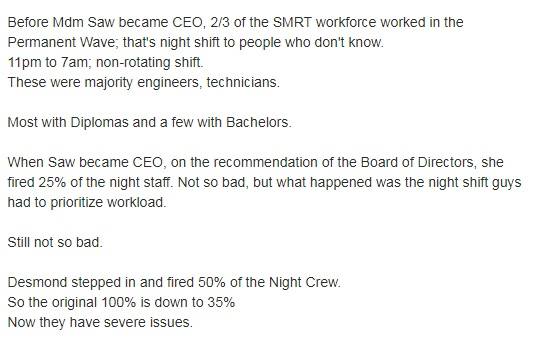 In the extract of the online report, it is alleged that Kuek fired 50% of the night staff when he took over the role of CEO.

The SMRT Facebook page questioned the allegations featured in the extract and states that instead of reducing, staff have been increased from 206 in 2010 to 395 in September 2017 and permanent night staff has been increased by 65% to the North-South and East-West lines,

Some of you may have seen this online report on SMRT (extract in the image).

This is obviously fake! How would SMRT have been able to complete the change out of all the power rails and 188,000 sleepers if staff count had indeed been cut so drastically?

Contrary to what is purported, under SMRT CEO Desmond Kuek’s tenure, the Permanent Way (PWAY) team that looks after our track and track-side infrastructure almost DOUBLED.
It grew from 206 staff to 395 staff from 31 December 2010 till 30 September this year.

The number of night shift workers also increased by 65% with more permanent night shift staff added to the North-South and East-West Lines in the same period.

The number of personnel carrying out maintenance work is even more when one adds external contract workers who augment the permanent staff on the tracks.

In a separate post, the Facebook page posted photos of Mr Kuek visiting staff in efforts to motivate the groundstaff to face the ongoing challenges faced by the transport company in recent months.

Many of our staff at the Jurong Crew Point were encouraged by SMRT CEO Desmond Kuek when he visited them today. His visit was part of his continuous efforts to rally our unsung heroes on the ground to continue to stay focused, united and to press on in doing their best despite the challenges they face. Among the 30 staff who were present, some shared their thoughts with him during the engagement session and many showed their commitment in doing their best to serve all who journey with us.