Singapore’s train system has been suffering from one public embarrassment to another, breaking its own record for breakdowns every year while the Land Transport Authority (LTA) and the Ministry of Transportation double down by releasing questionable statistics to show that in some metrics they cherry-pick, Singapore’s train system is doing better than ever.

You would think when senior management staff get caught falsifying systems management records for at least the past year, that the parliament sitting the next week would be a time of reckoning for the ministry, its regulatory body, their too-big-to-fail train operator Singapore Mass Rapid Transit (SMRT), and its line of incompetent bosses.

But then, this is the same august body that harboured the delusion of thinking it could proclaim the prime minister guiltless in open parliament, based solely on his testimony of events and not an independent investigation by a special counsel. Minister Khaw Boon Wan’s performance yesterday is par for the course, in other words, for the national transport clown show.

Singapore’s train network is three decades old. Things need to be replaced, upgraded, or they will start falling apart. Meanwhile please bear with the pain of living in a city whose infrastructure seems to be failing. Would that it were so simple as Khaw have us believe.

At other times, there is official acknowledgement from the train operators and the regulatory body that Singapore’s train network is high complexity, high density system. Sometimes when trains break down on a regular basis, no one has any idea why. Sometimes the faults are traced back to an obscure interaction between separate sub-systems. Sometimes the faults are traced back to multiple standards being used within a single sub-system.

There appears to be a lack of appreciation that the train network is a highly complex system of systems. What was solid infrastructure 30 years ago can only erupt in cascading failures when there is a policy of active neglect. What is true in biology is equally true in engineering: simple failures in a sub-system that are left festering for a long enough time will cross-infect other sub-systems until the entire system is brought crashing down.

This isn’t an organisational failure of the SMRT, or even a failure of its organisational culture. It’s a failure of the system of systems of oversight, of which SMRT is only a member. To reiterate: this decade’s series of cascading failures in the train system can only happen when there is a policy of active neglect, not just on the part of the operators but also the regulator and the ministry.

It’s like SMRT trying to blaming maintenance and engineering when it is top management that has made the clown show decision to cut out maintenance from operational budget. Or like LTA trying to blame SMRT in not agreeing which parts of the train infrastructure are its duty to maintain, when both the regulator and operator have in reality decided to keep kicking the can down the road for as many years as possible.

Using the name of Goh Keng Swee in vain?

It would appear that Khaw Boon Wan threw Desmond Kuek a softball, one as soft as what Khaw and his parliamentary colleagues threw to the prime minister when he convened parliament to address accusations of abuse of power.

Khaw repeatedly called Desmond Kuek a volunteer. Khaw’s attempt to perform PR for the SMRT CEO and shield him from public expectations of firing needs to be called out for what it is. The Middle Ground correctly and logically points out that under no real world circumstances would anyone regard a CEO of a publicly listed company as a volunteer.

You know, the same condescending attitude that a former head of the public transport council had some time ago. 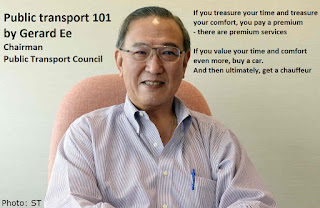 But as The Middle Ground points out in passing: Khaw seems to have invoked a principle laid down by the illustrious Goh Keng Swee, of a modern nobless oblige he expected from the leaders and elites of Singapore.

Except that’s the wrong principle and the worst principle to invoke from Goh Keng Swee. What would GKS himself do?

“Dr Goh Keng Swee’s men will assess your performance” are the 9 most frightening words in the history of Singapore’s civil service. Whichever ministry he took charge of, Dr Goh would first send in a team of organisational analysts, conduct audits of personnel, performance, and policies, and then fire, demote, or send lots of incompetent people to civil service Siberia.
Clearly, Khaw has chosen the wrong person’s name to take in vain and in so doing, insulted both the memory of that man and the civil service he kept on its toes. One man stood for no nonsense, ruthlessly beheading incompetent civil servants. The other wishes to abet Singapore’s civil service sinecure clown show!

This post was first published at akikonomu.blogspot.sg and reproduced with permission