What is really the Truth?

I will just like to offer my five cents worth of contribution to all those discussions about the uncertainty that the entire world is facing now.

In recent times, it is noticeable that the number of suicide bombings and senseless killings of human beings by terrorists seems to be on the rise. So far it seems that only ONE party has claimed responsibility to all these killings – ISIS.

Who are the people behind ISIS? What does ISIS hopes to achieve by all these senseless killings of innocent human beings?

I do not claim to have the answers to all these questions. I will attempt to solve this puzzle using facts that are available to me.

Let us now have a look at the stocks and shares market.

The following graph will indicate the stock price of Northrop Grumman over a 5 years period. 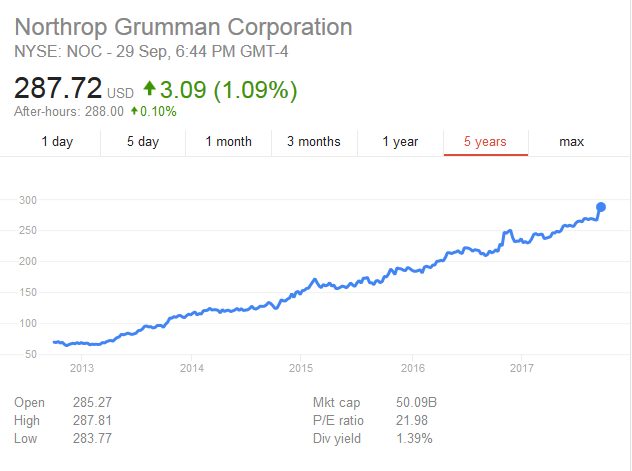 Now let us look at the stock price of another company Lockheed Martin. 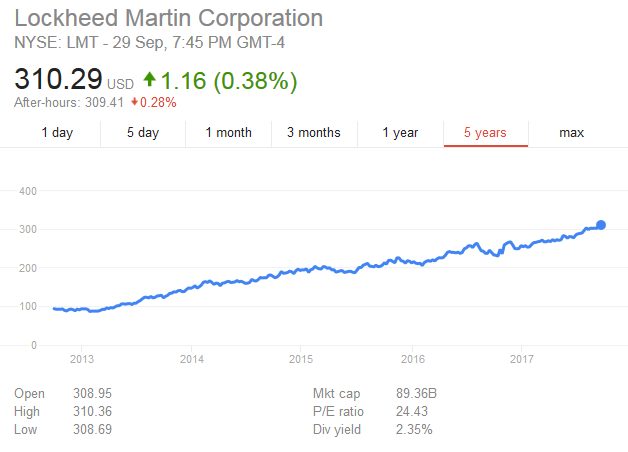 The stock price of Lockheed Martin has steadily climbed from USD 100 per stock to USD 310 per stock. So if you had bought 1 million Lockheed Martin stocks in 2012, you would have made a tidy profits of USD 210 million in 2017.

So what does Lockheed Martin and Northrop Grumman have in common? Both companies are in the business of selling weapons. Their biggest customer is the US government.

So who is the ultimate beneficiaries in the event of any conflicts? The companies that sell weapons to the US government and the rest of the world.

There are further evidence of the above hypothesis.

Right now, the entire world is familiar with the ongoing conflicts between the US President Donald Trump and North Korea’s leader Kim Jong Un.

So what is the ultimate result? Let us look at the news report from The Independent on 5th Sept 2017.

“Donald Trump has announced his is selling Japan and South Korea a “substantially increased” amount of US military equipment, as the President and his allies look for ways to counter the threat from North Korea.

Amid mounting tension over North Korea aggressiveness, and the US’s bellicose rhetoric and sabre-rattling, Mr Trump said he was ready to increase the amount of military hardware in the region – presumably as a bid to deter Pyongyang.

“I am allowing Japan and South Korea to buy a substantially increased amount of highly sophisticated military equipment from the United States,” Mr Trump said on Twitter.”

In the above article it now appears that both Japan and South Korea can buy substantially “more sophisticated US military equipment.

So what is the bottom line? When the conflict between the North Korean leader and the President of the United States escalates, the sales of weapons increased.

President John F Kennedy once said “The Chinese use two brush strokes to write the word ‘crisis.’ One brush stroke stands for danger; the other for opportunity. In a crisis, be aware of the danger–but recognize the opportunity.”

I leave it to your readers to form their own opinion.