HDB does not use the term “tenant” to refer to HDB owners, but HDB’s legal documents seemingly do

A member of public, Larry Leong penned a letter to the Straits Times forum which was published on 24 June, asking why is he required to pay property tax when he is a “tenant”:

The report on the homes in Geylang Lorong 3 reaching the end of their leases highlights the issues surrounding leasehold properties (Govt taking back 191 homes in Geylang when lease ends; June 21).

While applying to rent out my HDB flat, I noticed that the Housing Board referred to me as a “tenant”, and my potential tenant as a “sub-tenant”.

I have paid up my HDB flat fully, and the title deed has been left in the safe possession of the HDB who, it appears, is my landlord.

Is that correct or should the wording of these documents be updated?

If I am an HDB tenant, why am I required to pay property tax?

Can we have some clarity on whether HDB dwellers are tenants or real home owners for 99 years?

In response to Mr Leong’s letter, Ms Lim Lea Lea,  director (Branch Operations) of Housing & Development Board (HDB) wrote to the ST forum and had its statement published on 19 July 2017:

We thank Mr Larry Leong for his feedback (Are HDB residents tenants or owners?; June 24).

Purchasers of HDB flats are owners of their property.

Flat owners enjoy rights to exclusive possession of the flat during the tenure of the flat lease.

They can sell, let out, and renovate their flats, within the guidelines specified in the Lease and Housing and Development Act.

The name of each HDB flat owner is reflected in the title deed, the original of which is kept with the Singapore Land Authority, as part of the central and comprehensive record for all properties in Singapore.

This confirms his or her ownership of the property.

We would like to clarify that HDB does not use the term “tenant” to refer to those who have bought a flat, as Mr Leong had mentioned.

We use the term “tenant” to refer to those who rent public rental flats from HDB.

Wording on legal document from HDB seems to be different

Mr Philip Ang in his blog, wrote various articles on the matter of HDB ownership and shared screenshots of the legal document from HDB that imply that HDB “owners” are in fact lessees who are viewed as joint tenants and HDB as a lessor. 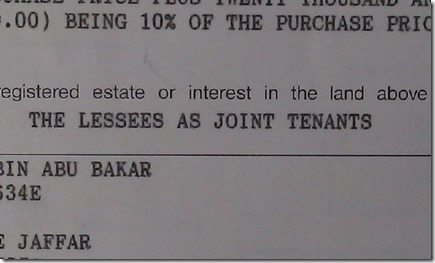 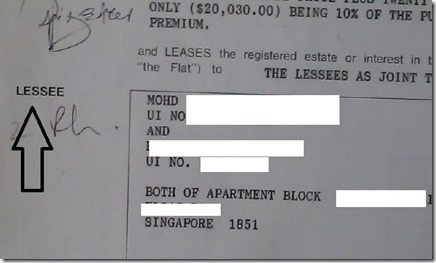 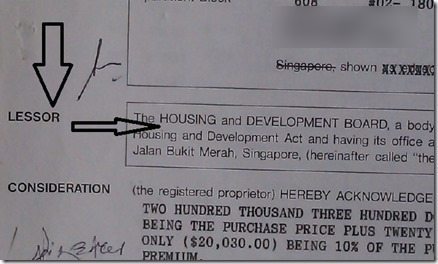 In his blog, Mr Ang wrote,

HDB ‘owners’ should never have paid taxes on property belonging to the state in the first place. What the PAP has done is legally convert our status as ‘lessees’ to ‘owners’ at the stroke of a pen. On top of being forced to pay property tax, we are also required to contribute to a sinking fund for long-term maintenance of assets which continue to belong to the government.

The government is the true owner of HDB flats and this is evidenced by its ability to suka suka amend HDB rules. If HDB flats really belong to us, there would be no need to notify HDB on renting out vacant rooms, working overseas, etc. Most Singaporeans have mistaken the little flexibility given by HDB as ownership.

If the legal document is to be trusted, PAP should not continue to confuse Singaporeans by using ‘lessees’ and ‘owners’ interchangeably.

Redefining ‘lessees’ as ‘owners’ has been a convenient way for PAP to maintain control over many aspects of housing while trumpeting to the world our unbelievably-high home ownership rate. This is wrong.

Singaporeans living in public housing should be paying zero property tax. Why should we pay taxes on a property which does not belong to us but to the state?

Is HDB ownership a lie?

Actually, HDB ownership is a big fat lie because:

(1) if you are the owner, the agreement would have said so, instead, you are called a lessee. Effectively, you are just a long term TENANT.

(2) it does not pass the acid test of ownership: Do you also own (a share of) the land? Private apartment/ condo owners own their land the building is on plus some surrounding land. That is why they can en-bloc their projects and HDB lessee cannot. The so-called Selective En-bloc can only be carried out by the owner, i.e. HDB, and not the lessees. and HDB had stated that only 4% of the HDB blocks will enjoy Selective En-bloc while the rest will be returned to the owner HDB after 99 years, at ZERO value, just like the end of a tenancy.

(3) the banks know that. Hence HDB lessees cannot mortgage a fully paid HDB or re-mortgage it to get some cash.

Another commenter, Lim Maiko wrote, “LOL try renting out your whole HDB flat and when u go into their website it asks you for the “SUB-TENANT’S” particulars. Why? Coz u are the main tenant! Bodoh!”