Grab vs Uber: Which is the Better Hailing App in Singapore?

By Value Penguin
Everyone has heard of Uber and Grab. These two apps both rank as the top 5 most downloaded app in the Apple app store, and has huge followings in every community ranging from its users, media pundits and investors. But which is really the best app for consumers in Singapore for to use? We’ve collected data on pricing on both apps for major locations in Singapore, and have also experimented with different traffic conditions to get you close to an answer.
Grab Is the Better App for Most Rides in Singapore
We’ve found that for most rides in Singapore, Grab proved to be the cheaper hailing service than Uber. For instance, for a ride between Tanjong Pagar Centre and Raffles Place, we estimated that uberX would charge about S$5, while Grab would charge about S$4.4, about 12% cheaper. This represents a trip that takes about 6 minutes over 1.8km. In fact, for car rides of under 30km, Grab turned out to be cheaper than Uber. 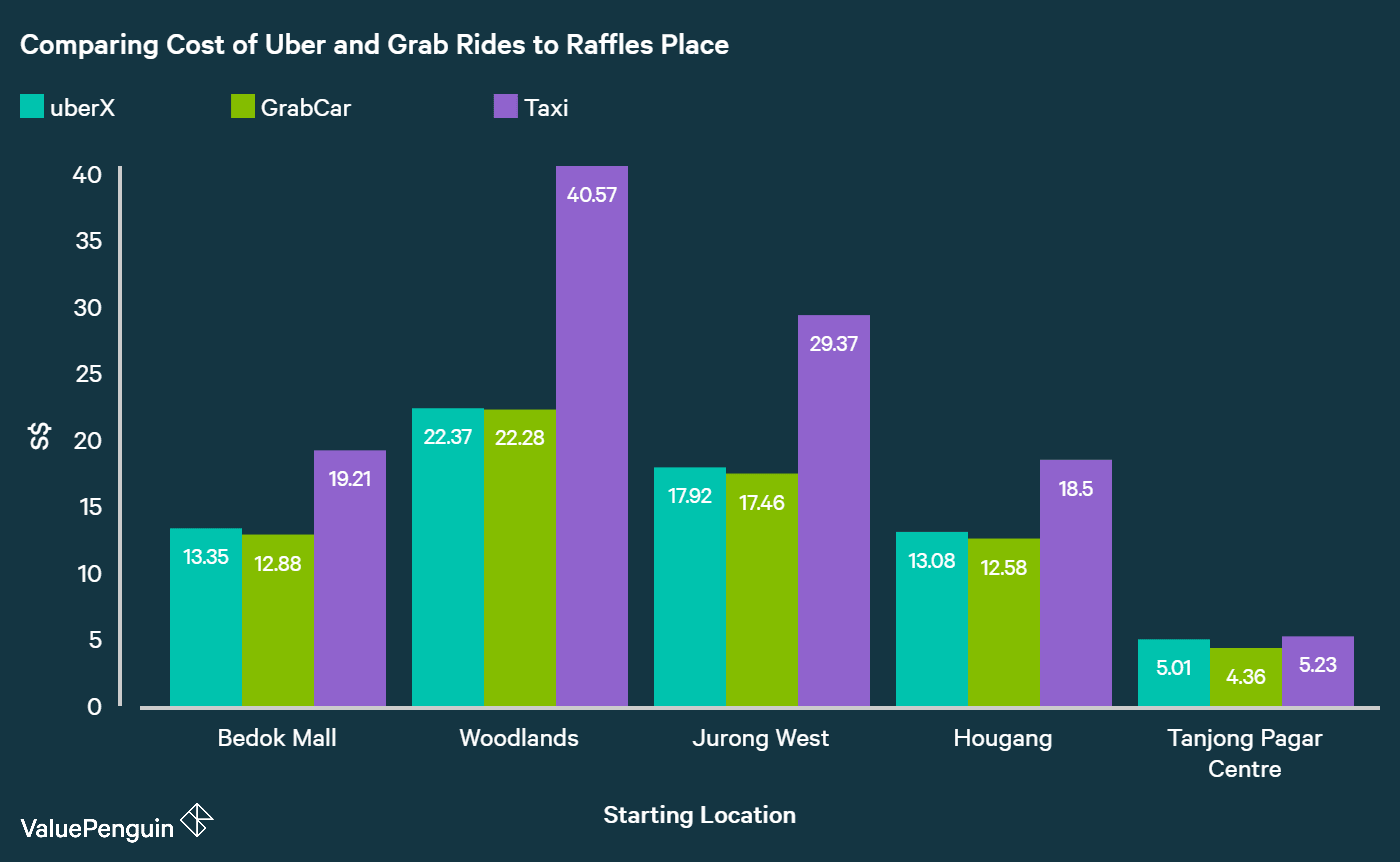 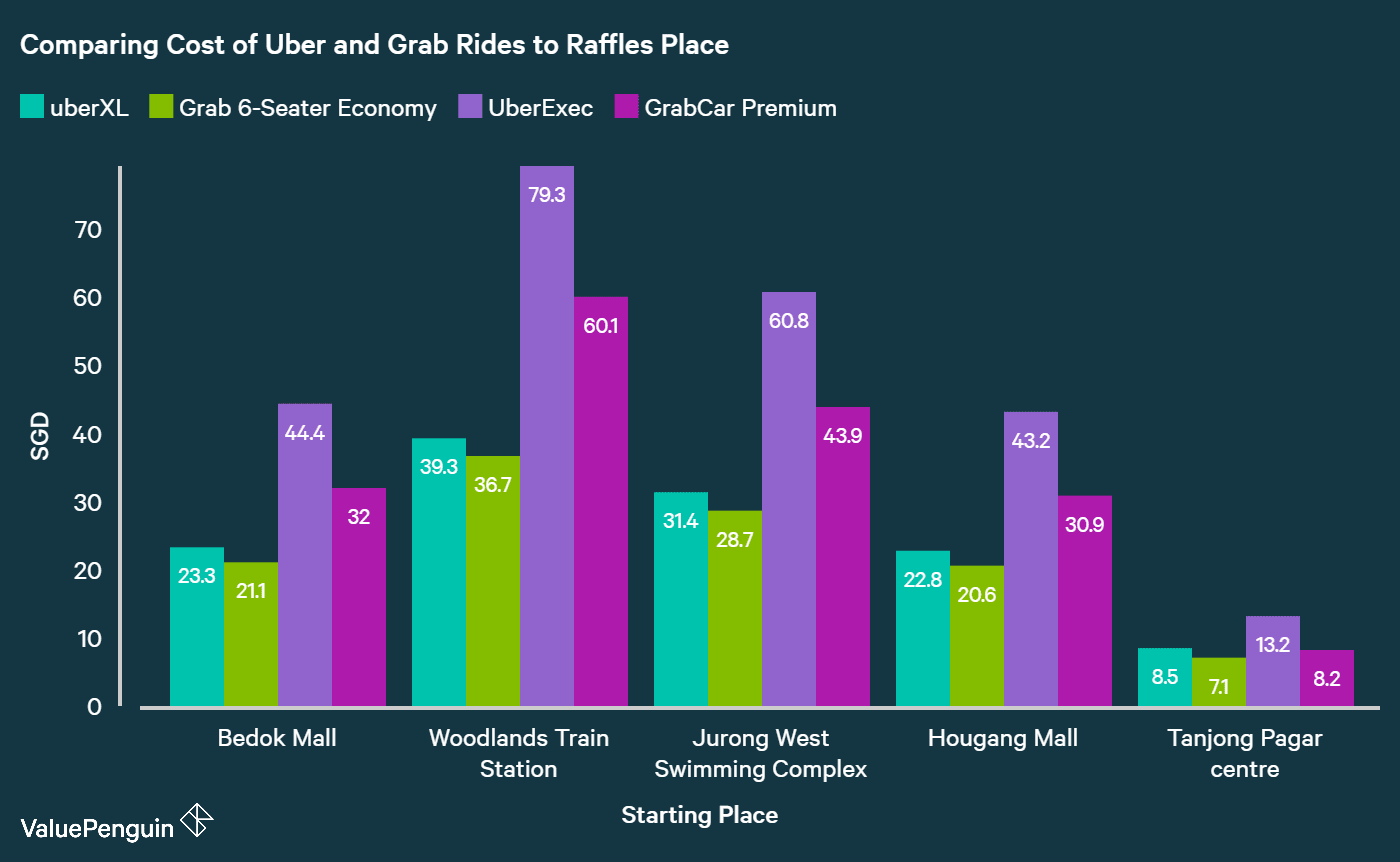 While the difference in costs of these two apps were not terribly big, it seems like this small difference is helping Grab win more consumer’s hearts in Singapore. According to the data we collected from the Apple App Store, Grab has consistently beat Uber in terms of download ranking. However, given that both of these apps provide much cheaper rides than taxis, they both ranked as top 5 most downloaded apps in the last 30 days. 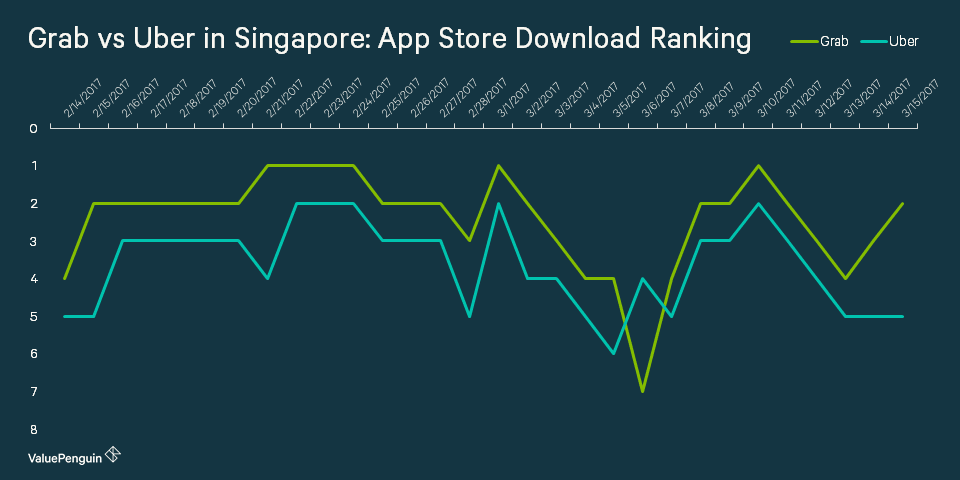 Uber Wins Out for Long Distances, But Not During Peak Hours
Where Uber did come out ahead of Grab was for rides that were especially long, i.e. longer than 30km. For instance, for a ride from Jurong West to Changi Airport, uberX’s estimated cost was about S$27.56, slightly cheaper than GrabCar’s S$27.86.
Cost of Car Rides to Changi Airport from Different Locations

However, when traffic prolongs your travel time, Grab still turned out to be the cheaper option for riders in Singapore. For instance, a ride from Jurwong West to Changi Airport example we noted above assumes that the trip takes about 30 minutes with normal level of traffic. If this were to become 40 minutes, uberX would cost about S$29.56, while GrabCar would cost S$0.1 less at S$29.46. Although this difference is very minute (literally counting pennies), it’s still meaningful for many consumers who are trying to save every penny possible, and switching from apps because of price difference is only a matter of a few finger swipes.

Pricing Mechanics
The chief reason why Grab wins out on most rides is that it charges a lower base fare. Although Uber does charge a lower per km fare, it’s not big enough to offset the difference in base fee given Singapore’s size in almost every case. Not only that, it’s important to remember that distances are not that variable for any given ride. No matter what time you are travelling at, the distance travelled is the same. However, what is highly variable is the time it takes to complete a trip. Since Grab charges a lower per minute fare, it can be cheaper than Uber especially during peak hours, even for longer rides.

Credit Card Promotion Battle
Perhaps because of this pricing difference, Uber has been pushing out promotions with credit cards by offering free Uber credits for credit card user. For example, Uber is currently pushing out a credit card promotion with Standard Chartered credit cards to offer S$150 in Uber credits for new card customers. This is akin to what Grab was doing at the end of 2016 with Citi, offering S$120 of Grab Cash for new card customers.
Interestingly, Grab was the #2 player after Uber when it was running its promotion with Citibank credit cards. It seems that Grab’s strategy actually worked & helped it claim its #1 spot starting in January. Given this, it might be possible for Uber to climb back to the top, especially if it decides to drop its pricing enough to be on par with or lower than Grab’s. Consumers would be smart to take advantage of these opportunities to save on their transportations with these free credits by switching between the two apps whenever they find the better deal.
Methodology
In order to calculate how each ride costs for Uber, Grab and conventional taxis, we collected data on each service’s pricing mechanisms. Then, we selected a few landmark locations in major neighborhoods of Singapore: CBD (Raffles Place & Tanjong Pagar Centre), Woodlands Train Station, Jurong West Swimming Complex, Hougang Mall, Bedok Mall and Changi Airport. By calculating the distance and time required to travel between these places, we were able to estimate the cost for all of the services we were studying. We also used fare estimators to check our estimations were in the ball-park of what the companies were claiming to cost. For our trips, we assume no toll or additional surcharges.
This article was first published on Value Penguin website.