MPs still call for fiscal prudence despite having $190 billion surplus between 2005 and 2014?

But even as Singapore doubles down on investments to help businesses and workers transform, as well as continue social spending and infrastructure developments, some MPs have voiced concerns about overspending.
MP for West Coast GRC Foo Mee Har noted that Singapore’s weakening fiscal position is a concern, after total expenditure growth outstripped growth in operating revenue for five consecutive years. She also said it is “worrying” that additional funds from Temasek’s inclusion in the Net Investment Returns (NIR) framework “appears to have been exhausted quickly”.
“Clearly, Singapore must find a sustainable fiscal footing for our future generations and we need a thorough review of both expenditure and revenue,” said Ms Foo, while proposing a limit on how much the Government can take from the Net Investment Returns Contribution (NIRC) to fund expenses.
Ms Sun echoed that view and suggested binding or matching expenditures to the country’s revenues so that any increases in expenditure are carefully considered in relation to revenue.
The MP for Pasir Ris-Punggol GRC also raised a question about the “inherent risks” of being reliant on the NIRC – the largest source of funds for Singapore’s Budget at about 20 per cent of total revenue. She cited recent comments from Norway’s central bank governor, who warned about a potential 50 per cent loss of capital over the next 10 years for the country’s sovereign wealth fund amid rising expenditure.” 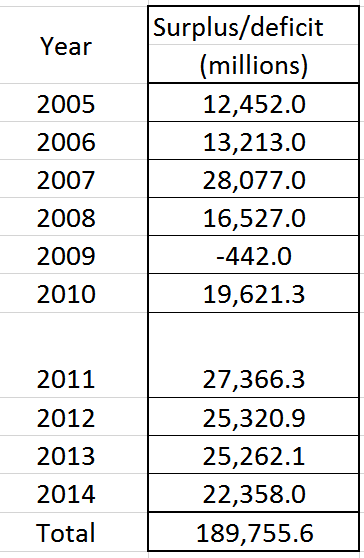 So, if we follow the full IMF fiscal reporting guidelines – does it mean that our Budget Cash Surpluses from 2005 to 2014 was about a whopping $189.8 billion?
MPs call for the need for fiscal prudence?
Looking at the above data – do you think that we should be emphasising so much on the need for fiscal prudence in the Parliamentary debate on the Budget?
What are your thoughts on this?