Three bus captain of SBS Transit were physically assaulted in separate incidents by a Chinese commuter male who had boarded their buses along Bartley Road on 31 December 2016 at around 1pm.
SBS Transit said in a Facebook post that the assailant slapped and hit the bus captains, one driving Service 93 and two others driving Service 129, which were taken off duty to rest for two days after the incidents and get medical treatment.
It then said that it has identified the assailant through the CCTVs on the buses and has given the footage to the Police to assist in the case.
“We do not tolerate such uncalled acts of violence against our staff and we take a serious view of such acts. The attacks were deliberate and malicious and we will not spare any effort to ensure that the assailant is caught. We are working closely with the Police to this end,” SBS wrote. The Police said on Sunday (1 January 2017) that a 23-year-old man is helping with investigations into the series of assaults.
Melvin Yong, the Executive Secretary of the National Transport Workers’ Union (NTWU), posted on his Facebook, asking that commuters to respect the bus captains as they work hard to perform the important task of transporting commuters safely to their destinations.
Mr Melvin also urged the authorities to quickly identify and arrest the assailant/s and appealed for any eye witnesses to the three incidents to come forward to assist in the investigation. Khaw Boon Wan, the Minister for transport, also wrote on his Facebook page, saying that the public transport colleagues work round the clock to ensure a smooth count-down celebration by Singaporeans and not just during festive periods like the year-end party, but throughout the year.
“Remember that our bus and train captains brave the weather and steer commuters safely to their destinations. As commuters, we should appreciate and always think of how we can make their jobs easier. Collectively we can then ensure a safe and pleasant journey for all,” he added. 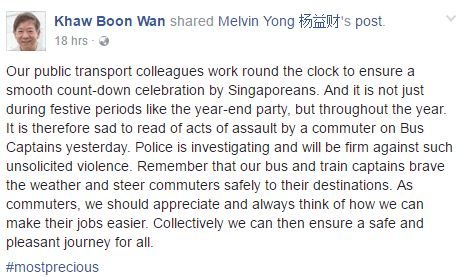