Against a backdrop of fast depreciation in emerging market currencies and a new wave of outflows, China’s government is planning to impose new restrictions on outbound foreign investment, according to several media reports.

Foreign investment has become an important channel for capital outflow and it put downward pressure on the renminbi and foreign reserves. Some companies borrowed large amounts of RMB funds on the mainland and then purchased foreign assets to diversify their portfolio and risks. The practice reinforced a negative feedback loop: currency depreciation expectation – capital outflow –foreign reserves shrink – currency depreciates further. Therefore the authorities are likely to implement new restrictions to stem outflow soon.

Offshore renminbi, CNH, has depreciated over 6% against the greenback this year and the currency is now trading near to eight-year lows. Technically, the near-term support and resistance levels can be found at 6.87 and 7.03 respectively.

Crude oil prices dropped more than 3% last night and are trading at about $45 a barrel. This happened after OPEC members failed to reach a production freeze consensus in Vienna, the Iranian oil minister saying that the country will not reduce production, while the Saudi’s insist that all members should participate. The deal is facing deadlock now as oil prices get hammered. Energy and oil & gas sectors may get affected in today’s trading too. 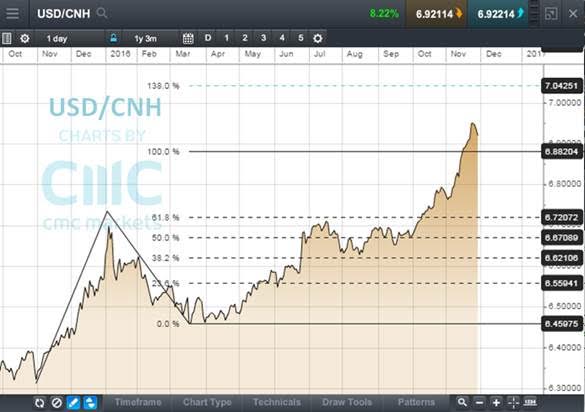