Positive surprises help to alleviate investor’s concerns surrounding an impending Fed rate hike, as more evidence shows that the US economy is strong enough to withstand a 25bps rate rise in the near term. The US dollar remains strong against its major peers.

China’s Q3 GDP data reads 6.7%, which is in line with market consensus. The recent growth in credit helped to cushion the downside of slower exports and industrial production, thus helping to maintain GDP growth at a stable rate of 6.7%. The country’s currency, CNY, has recently hit a six-year low against USD.

Crude oil prices have entered into consolidation phase after hitting  12-month highs last week as the US oil rig count jumped to a seven-week high as more oil fields have resumed operation since oil price climbing back to $50 benchmark.

All these contradict with the agreement made by OPEC members and other major oil-producing countries in their recent gathering in Nigeria. Uncertainties about whether the OPEC countries will honor their commitment to reduce production now become the biggest resistance over crude oil prices in the near term. WTI crude oil Nov contract now trades at $50.20 area, with the immediate support and resistance levels at $48.60 and $52.70 respectively. 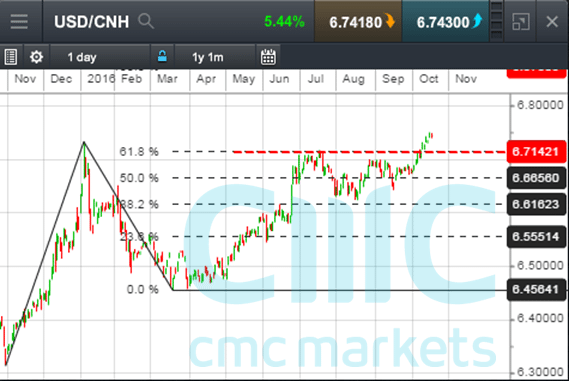