US stocks fall to two-week low as corporate earnings disappoint

Disappointing earnings released by Fastenal Co and Alcoa Inc could be blamed for the sell-down yesterday. More importantly, the fear of a rate hike at the end of this year and relatively high valuation of US equities are ultimately the reasons to stop the market from going higher.

The FOMC Sep meeting minutes are due to be released this evening at 2am Singapore time, and the market expects a tougher “Hawkish” tone from Federal officials. The implied probability of a December rate hike has climbed to 67%, from 60% a week ago.

US dollar index surged to the highest level in over three months, signaling that the market has priced-in a rate hike in advance.

GBP/USD slumped 2% last night to a new record-low of 1.2120 before it rebounded sharply this morning. The concerns over a possible “Hard Brexit” has been alleviated as UK’s Prime Minister Teresa May has accepted that Parliament should be allowed to vote on her plan for taking Britain out of the European Union.

The Parliament debate will give lawmakers a favourable possibility of maintaining close ties to the 28-nation trade bloc.

Crude oil prices retraced after reaching its one-year high on Monday as US dollar surged to the highest level in three months. Stronger dollar will probably continue to weigh on commodities prices including oil, gold and industrial metals in the near term.

However, long term prospects of crude oil prices are still determined by the supply-demand relationship fundamentals.

OPEC members have just reached an agreement on curbing output in their earlier Algiers meeting a few weeks ago. All the signs of recent developments – where major oil produces in the word are freezing output – represent clarity on the issue that will support recover of oil prices, should they honor their agreement.

Separately, the offshore Renminbi CNH has dropped to the lowest level against USD since Jan 2016. USD/CNH has broken through a key resistance level – 6.70 yesterday.

Expectations of the Federal’s rate hike by year end probably paved the way for a slow depreciation of Chinese yuan in the near term. The next resistance levels could be found at around 6.83 and 6.87 area. 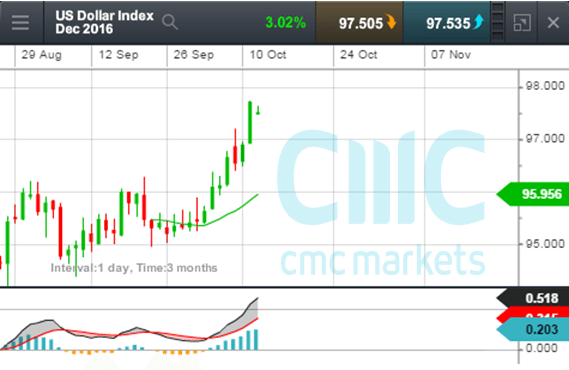