A volunteer from the Singapore Democratic Party, Abdul Salim Harun questions if a member of the People’s Action Party (PAP)  was given information by the Resident Committee (RC) that he booked a BBQ pit for an event that he organised. 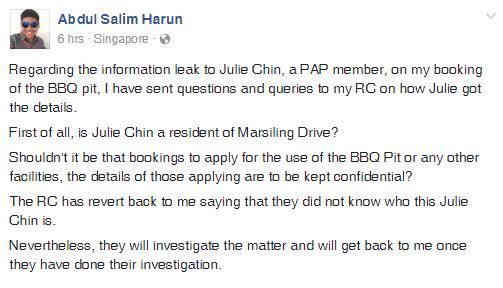 Julie Chin, a frequent commenter on Facebook page, Fabrication about PAP (FAP) commented on the Facebook page of Singapore Democratic Party (SDP) that it gate crash an event run by the RC in Marsiling-Yew Tee GRC to further its political presence.

When SDP responded that the event was not organised by the RC, Julie replied saying that the BBQ event was organised and booked by Abdul Salim. She went on to allege that he is a SDP member and SDP was invited by its own member. This comment was made before Abdul Salim made known that he was the person who booked the BBQ pit.

Abdul Salim posted on the same comment thread, clarifying that he is not a SDP member but a volunteer with SDP and a resident of the area. He added that end of the day, there is no need to politicise the event as he is organising for his fellow residents.

He added that he is waiting for the RC to give an answer to him as they say they will investigate the matter.

Several individuals have commented on the matter and asked how did Julie obtain the information that Abdul Salim was the person who booked the event and commented that her statements were unbecoming of a PAP party member.