MOH: Isolation of patients with Zika ceased; Zika testing subsidised for all Singaporeans with symptoms

The Ministry of Health (MOH) stated in the press release yesterday (5 September) that suspects of Zika cases will be no longer required to be isolated while waiting for test results starting from today (6 September).

MOH stated that the cases have so far been mild. Therefore, confirmed cases will no longer need to be hospitalised unless medically indicated. It also stated that starting from 7 September, subsidies for the Zika test to all Singaporeans with Zika symptoms will be extended.

The National Environment Agency (NEA) and MOH stated that they are adjusting their strategies to manage Zika the same way that they deal with dengue since they expect Zika cases to emerge in more areas the way the Aedes mosquitoes do.

As of noon on 5 September 2016, there are three clusters and 16 cases with no known links to other cases and clusters.

Isolation of suspect and confirmed Zika cases to cease

The statement said that all suspect cases of Zika infection are currently isolated in hospitals as an added precaution while awaiting confirmation of their blood test results.

Since the transmission in the community emerges, and most of the patients do not show symptoms, isolation of patients with symptoms will have limited effect.

Starting from 6 September, patients can return home to wait for their test results after their urine and/or blood samples have been taken at the clinics or hospitals. Those who have tested positive for Zika will be hospitalised only if judged clinically necessary by their doctor, similar to how dengue patients are managed.

Subsidised Zika testing for all Singaporeans with symptoms

Typically, patients recover within 4 to 7 days, as Zika is generally a mild disease. However, it can be quite serious for pregnant women as the virus can sometimes cause microcephaly in a small number of unborn foetuses. If a pregnant woman happens to be tested positive for Zika, her doctor will follow up closely with her to monitor her health and the development of her baby.

Zika testing criteria for Singaporeans who are not pregnant

As Zika is less dangerous for members of public who are not pregnant, currently those with symptoms and who live, work or study in the affected areas (Aljunied Crescent/ Sims Drive/ Kallang Way/ Paya Lebar Way cluster; Bedok North Avenue 3 cluster; and Joo Seng Road cluster) can get the test free, while others have to pay for the full cost of the test. However, the data is still useful in directing vector control efforts.

The numbers of cases have increased rapidly and found in other parts of Singapore. Therefore, testing will no longer be focused on the clusters only, and MOH will provide a subsidy for the test by the public sector laboratories. In the meantime, doctors will continue to make the clinical judgment on individuals whether testing of Zika is necessary.

Pregnant women will remain a special group to whom the Government will make Zika tests more affordable and accessible. For those who have Zika symptoms or whose male partner is Zika-positive, the public sector laboratories will continue to extend free Zika tests to patients at the public healthcare institutions, private hospitals, and clinics.

However, The Clinical Advisory Group on Zika and Pregnancy had stated that testing is not routinely recommended for pregnant women who do not have symptoms of Zika and whose male partners are not Zika-positive. If they still wish to be tested for Zika and have been assessed by their doctor to require testing, when they are subsidised patients at our public healthcare institutions, they can access the subsidised tests.

MOH stated that patients will have to pay the other usual charges such as doctor’s consultation fee, on top of the Zika test.

FOR SINGAPOREAN CITIZENS AND PERMANENT RESIDENTS 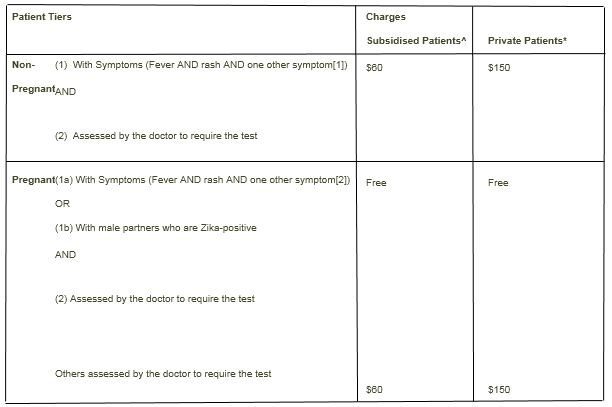 ^ This refers only to subsidised patients at the public healthcare institutions