The calm before the storm

The spotlight will once again swivels towards the speech from Federal Reserve Chairperson,  Janet Yellen – at the Jackson Hole Symposium on Friday morning. This is the big event that the markets anticipated, and it has the potential to create waves within the calmness that has prevailed throughout this month.

The previous statements from other Federal members dropped little clues of decisive information with regard to the timing of the next rate hike. However, two months of strong Non-farm numbers, together with beating new home sales has led the market to believe that Yellen will probably take a more hawkish stand in this meeting.

The implied probability of a 25bps rate hike, according to the future and options market, has risen from 22% to 32% a week ago. Yet it also shows that the market is not fully prepared for a September rate hike, and thus any ‘hawkish surprise’ could dampen the fragile sentiment that will potentially lead to panic selling. If that happens, a dramatic increase in the likelihood of a rate hike will push the dollar index higher, expounding the weakness in commodities. British pound, Japanese yen, Euro and Chinese yuan are also susceptible to heightening volatilities in the coming weeks.

Hang Seng index failed to break through a key resistance level of 23,200 and has consolidated following its remarkable 28% rally from February this year.  Indian’s Nifty 50 index has gone through a similar rally too, and it has been ranging at 8,600 area. This has already persisted for a month and is the highest level attained in more than a year. US equities were also trading at a multi-year high, both in terms of index level and valuation.

While less risk-taking activities ahead of Jackson Hole meeting could explain part of the cautious sentiment, yet the question begs – how much upside do the markets have from here?

Momentum is fading along with trading volumes. On the backdrop slumping commodities, weak demand and overcapacity in emerging economies, sentiment has become more fragile and susceptible to any form of shocks. These shocks include the likes of the Federal’s rate normalization path, the US election and rising political and financial risks in overseas markets. 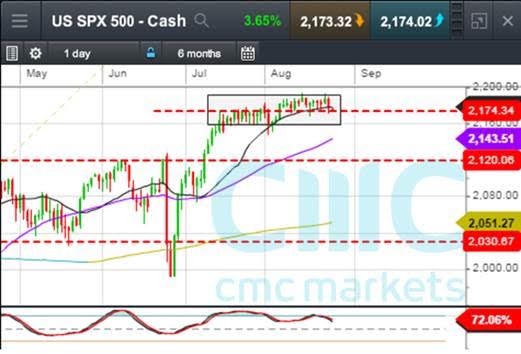