Sixth and longest-serving President, S R Nathan passed away at the age of 92

S R Nathan, the sixth and longest-serving president of the country, has passed away at the age of 92.

Mr Nathan, who was Singapore’s longest-serving president, died on Monday night (22 August) at the Singapore General Hospital, according to a statement from the Prime Minister’s Office. 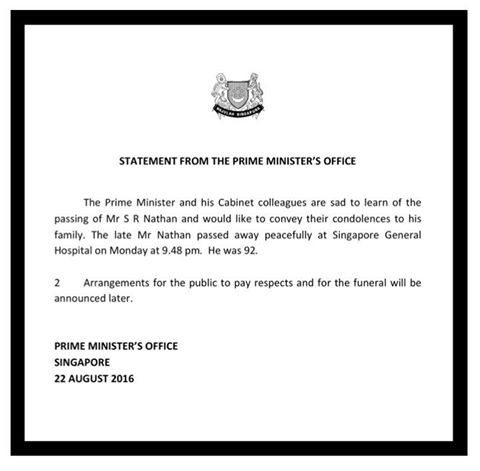 PMO statement wrote: “The Prime Minister and his Cabinet colleagues are sad to learn of the passing of Mr S R Nathan and would like to convey their condolences to his family. The late Mr Nathan passed away peacefully at Singapore General Hospital on Monday at 9.48 pm.

“Arrangements for the public to pay respects and for the funeral will be announced later.”

Prior to this, Mr Nathan has been diagnosed with kidney failure and had been undergoing dialysis in the past few months. He had had been in critical condition in the Intensive Care Unit of the Singapore General Hospital since 31 July, after suffering his second stroke in two years.

Mr Nathan was sworn in as the sixth President of Singapore on 1 September 1999. He was elected President without contest in both Presidential elections in 1999 and 2005.

The last appearance of Mr Nathan in public was at the launching of the book Majulah! 50 Years of Malay/Muslim Community in Singapore on 29 May this year.

Mr Nathan is survived by his wife Urmila Nandi. They have a daughter, a son, and three grandchildren.

Prime Minister Lee Hsien Loong wrote on his Facebook, saying that he is deeply saddened by the passing of Mr SR Nathan today.

He wrote, “Mr Nathan’s life is an inspiration to us all. His was a story of how a young boy strove to triumph over his circumstances and make a contribution to society. He held many public service posts, and occupied the highest office in the land.”