As expected, the Bank of England reduced the benchmark interest rate by 25 bps for the first time in seven years to a record-low 0.25 per cent last night. The surprises came from the central bank’s ambitious easing plan – including 100 billion pounds of bank lending and 70 billion pounds of bond purchasing – as part of the efforts to defend the country against recession.

Policymakers said they had scope ease more if needed, including taking the key rates close to zero if the UK’s economy faces adverse impact arising from the country’s vote to leave the EU. Sterling tumbled over 1.2% right after this announcement; the FTSE 100 Index rose cheerfully on fresh easing.

US Non-farm payrolls in focus tonight

Traders will be watching US Non-farm payrolls closely tonight in order to evaluate the likelihood of a rate hike this year. This will have an impact on the strength of the dollar index, and thus set the tone for the forex market next week.

The market expects the non-farm payrolls to increase by 180k, while the numbers in the last two months were 38k and 287k respectively. Strong employment figures will be supportive of a rate hike and thus a stronger US dollar.

Asian equities rebound slightly as oil prices get back to $40

Asian markets closed slightly higher after a sharp rebound in oil prices helped to alleviate the nervousness across the desk. Safety assets such as yen, gold and silver fell for a second day, signaling improved market sentiment, at least temporarily.

The Hang Seng Index finished 0.43% higher, lifted by a strong performance from HSBC (+2.6%) and Standard Chartered bank (3.75%). The $2.5 billion share buyback plan following HSBC’s sale of its Brazil business and hopes for another “substantial” buyback next year has sent its share price to a three-month high.

Singapore’s local banks, on the other hand, traded lower on Thursday. DBS has fallen more than 8% from its recent highs to a key support level at $15.00. Investors remain cautious ahead of its 2Q earnings results, which will be released next Monday. 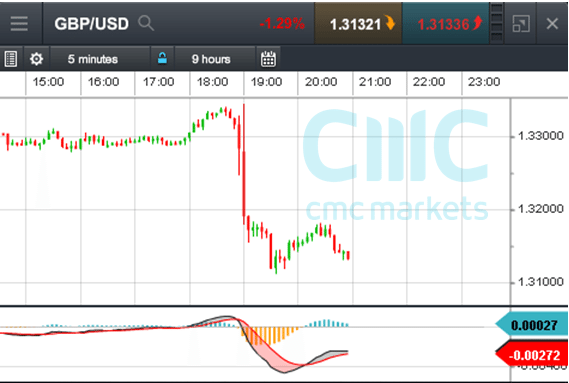