SINGAPORE – The Land Transport Authority (LTA) in a press release on Wednesday (27 July) said that average daily weekday ridership has tripled from 83,000 in October 2015 – before the Downtown Line (DTL) 2 opened – to more than 250,000 as of mid-July this year.

The average number of weekday journeys on public transport along the DTL corridor also increased by about 60 per cent since the opening of DTL2 last December – a 16.6km, 12-station stretch linking to the north-western parts of the country.

The LTA noted that the opening of DTL2 has shortened journey times.

“As more commuters are attracted to the DTL, commuters on other rail lines also enjoy more comfortable rides.”

Land Transport Authority (LTA) said the opening of DTL2 “has changed the travel patterns of residents along the north-western corridor, it is likely that more commuters have shifted from driving to taking the DTL,” the LTA said.

There has been increased use of feeder bus services that bring commuters to DTL stations, such as Services 920 and 922 in Bukit Panjang.

The LTA has introduced new or extended bus services, such as Services 979 and 983, to meet this increased demand.

Commuters living along the DTL corridor who used to take the bus are now using the train instead.

This had led to bus journeys along the DTL corridor becoming smoother, with speeds improving by up to 6 per cent during peak periods – this could be due to fewer boarding and alighting passengers, and hence shorter dwell time at bus stops, the LTA added. 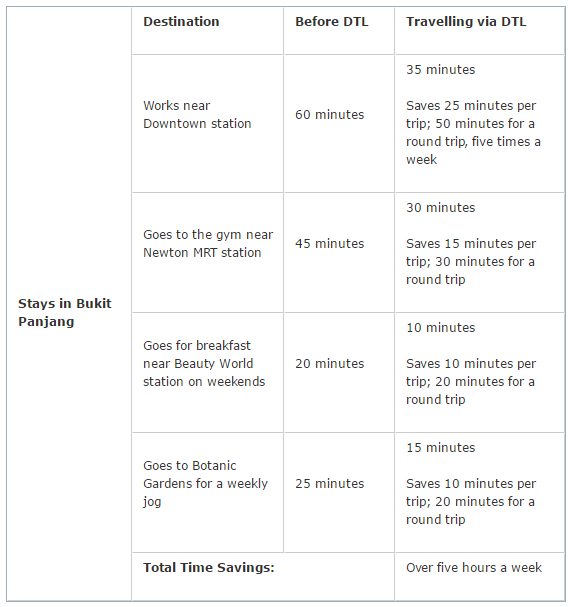 While breakdowns for commuters are not as often as what the North-South and East West Lines have been experiencing, nevertheless, it happens from time to time. In April 2016, commuters were stuck in Downtown Line train for over 30 min.