The European Central Bank decided to leave rates unchanged despite worries about how Britain’s vote to leave the EU will affect the economy. The broad-based major European markets closed mixed on Thursday.

The Japanese yen surged by over 1% right after the BBC showed a recorded video in which the BOJ’s governor Kuroda said there is no need for, or possibility of, helicopter money – hinting that the BOJ might not necessarily expand its monetary base at the end of July as the market had expected. Although the BBC had clarified that this was a recorded video captured one month ago, it touched a nerve in the market and put doubts over the next BOJ meeting, which now becomes the biggest puzzle for the rest of this month.

USD/JPY has started to pick up momentum since 11th July; right after Shinzo Abe won sweeping victory in the Japan election. His track record of supporting monetary easing and his ambition to order a new round of fiscal stimulus spending after the election had led the market to speculate on a new round of “Abenomics”. The yen has since depreciated as much as 7% against the greenback, pushing the Nikkei Index higher by 11% over the past 9 trading days.

Now the risks are unwinding and expectations are diminishing. Nikkei futures tumbled as the yen strengthened during European trading hours on Thursday and this may set the tone of a soft opening in the Asian markets this morning.

The US dollar softened against its major peers: JPY, AUD and CAD. CNH and SGD also traded higher against USD. A weaker dollar index sent gold and silver prices higher. As uncertainty rises, perceived safe haven assets including treasuries, gold and silver may end the consolidation phase sooner than expected. 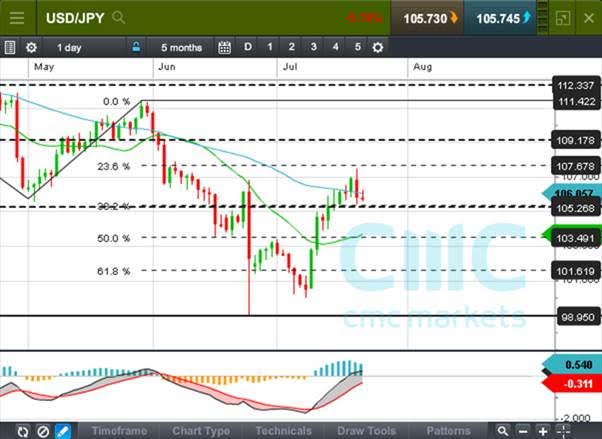 ‘No change’ on Olympics, Japan says after US virus travel warning