Asian equity markets finished lower on Tuesday, ending the rally after 6 days of gains.  US 10-year treasury yields dropped for a second day- a signal that market sentiment has turned towards a more cautious stance.

The Hang Seng index and S&P 500 index have been confronted with key resistance levels at 21,800 and 2,160 points respectively. Singapore’s Straits Times Index has also consolidated after hitting a three-month high of 2,940 points.

Speculation on monetary easing has run out of steam and market focus is now turned to company earnings, which are the better proxy of the underlying economic performance.

The Australian dollar has fallen sharply against the greenback as the market starts to speculate on a possible rate cut after the release of RBA minutes. Weak inflation data together with dismal employment report last week has led to higher probability – 59% according to Bloomberg’s implied probability – of a rate cut in the next RBA meeting in early August.

AUD/USD is testing the psychological support level of 0.7500 during Asian trading hours on Tuesday.

The mid-point of onshore CNY against USD has been lowered by 156 points to 6.6961, the lowest level since October 2010. Currently the spread between offshore and onshore renminbi is around a hundred points. The offshore CNH has continued to depreciate against the US dollar since May by over 2,200 points, or 3.5% to 6.7070 today.

The recent decline in the yuan is mainly due to a stronger US dollar amid the political turmoil in Europe and the UK which drove up demand for safety. As the pound and euro were down sharply after the Brexit vote, the yen and US dollar were being pushed up sharply together with gold and silver. Another important event is the military coup in Turkey, which increased the uncertainty and once again gave dollar with a boost. 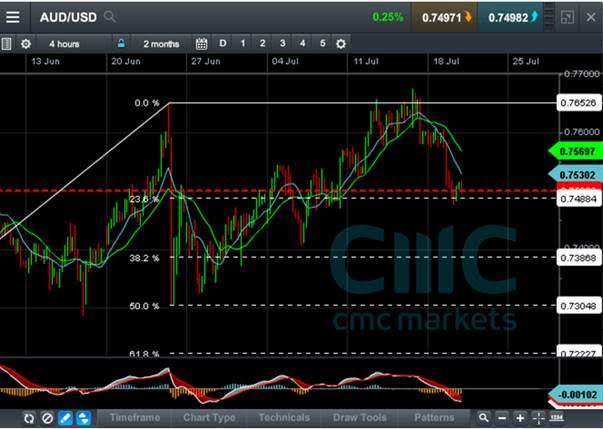