The Land Transport Authority (LTA) finally announced on 15 July that it would be taking over all “SMRT’s operating assets” under the New Rail Financing Framework (NRFF) to allow SMRT Private Ltd to focus on improving its service levels.

As to be expected, the well-prepared propaganda is being executed by the MSM to convince the public of this necessity.

On the NRFF, Minister of Transport, Mr Khaw Boon Wan said “This should achieve the twin objectives of raising rail reliability and reducing crowdedness.”

But we know this is false because if the train system was designed for a much lower population, crowdedness could only increase. How does Khaw propose to reduce crowdedness when the government has already decided to increase the population to 7 million and beyond? Telling stories about butterfly-lovers again right?

When SMRT said “SMRT will still shoulder significant risks, says its CEO”, it conveniently ignored the $100 million plus profits generated by its prime properties. Once again attempting to hoodwink the public with its figure of speech, just like its 26 “not safety-critical” defective China-made trains.

LTA claimed that the rail industry is now more contestable since the licence tenure has been reduced to 15 years from 30 to 40 years, this makes the industry more contestable. But who are we kidding about competitors having an equal competing ground with Temasek Holdings, Singapore’s investment branch owning 54.1% of the transport company?

This can be clearly seen from government’s actions, to award the company with financial benefits for the work that it was supposed to accomplish and fare increases granted despite the poor standard of reliability by the operator for the past few years. 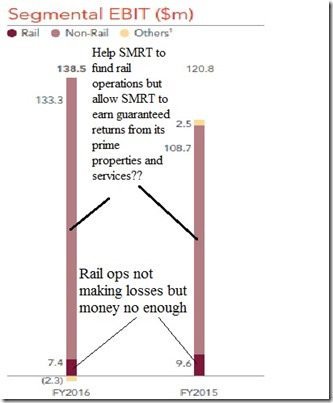 Even though LTA in its statement stated that SMRT Trains will comply with a set of new Maintenance Performance Standard to improve its maintenance processes under the NRFF. But what is not said is that LTA will bear the cost of upgrading the system due to the years of neglect under former CEO, Shaw Phaik Hwa.

Hence, SMRT will only need to spend based on what is advised by LTA’s standards and the responsibility to ensure the assets are upgraded to the demand of infrastructure due to increase of population, will no longer be upon the company but upon LTA and the taxpayers.

Trains, signalling system, shelters, and other assets will be brought and built by LTA and SMRT will be tasked to manage and maintain them while running their other operations such as retail and advertising business. Keeping the profit for its shareholders when it could have been used to subsidise the running cost of the public transportation system.

With SMRT’s growing non-rail profit, currently more than 10 times its rail profit, will SMRT be able to focus on rail operations and will LTA subsequently have to cover the job that SMRT was supposed to do due to the NRFF?

SMRT’s top management is also seriously overpaid for their poor performance. Using Hong Kong’s “gold standard” MTR for comparison, SMRT CEO was getting about the same pay as his counterpart in HK in FY 2015. However, MTR CEO Lincoln Leong was steering a S$8.3 billion revenue ship vs paper general’s S$1.23 billion sampan.

A badly run organisation – ZERO relevant experience military personnel parachuted into key positions – will not magically turn around overnight just because it has been given an additional 1 billion tax dollars.

The government is trying to project an image of striking a good deal for commuters when in reality, NRFF is a gift to SMRT, its CEO and its major shareholder, Temasek Holdings. Annually, hundreds of millions in capital expenditure will be transferred to commuters who are also taxpayers. SMRT will continue to earn guaranteed profit for its shareholders as far as the eye can see.

Unlike the 70% gullible public, the investment community is not easily hoodwinked and has piled into SBS Transit since months ago. This confirms massive profits for SMRT and SBS Transit akan datang. 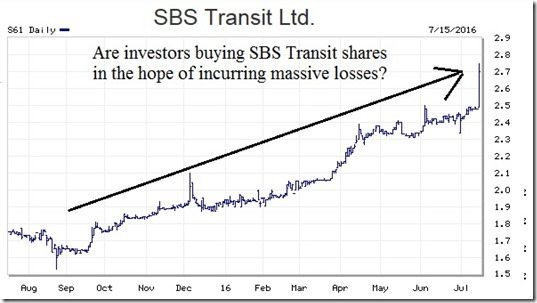 We commuters will soon be paying for train maintenance through LTA’s generosity while SMRT will get to keep all its other profitable businesses. The NRFF is merely a convenient tool for the government to privatise profits and, again, socialise costs.