The market embraced a risk-on rally for a third day, as US equities hit fresh record highs and European and Asian markets extended gains. Demand for safety has reduced significantly and thus gold, silver and treasuries have fallen from their recent highs.

Market sentiment has improved as Britain’s new prime minister has been confirmed and thus substantially reduced the political uncertainties following the Brexit vote.

The new PM, Mrs. Teresa May has stated clearly that Brexit will proceed but she will not trigger Article 50 until early next year at least, which gives her time to formulate Britain’s negotiating position before they start formal talks with the EU.

Although there is still a lack of clues as to when negotiations will start and the new terms of the UK’s relationship with the EU still remain uncertain, at least now we know there is a plan and the roadmap is clearer.

Sterling rebounded remarkably against USD on Tuesday as the market is more confident about Britain’s future with the new leader. However, the future implied probability of a rate cut at tomorrow’s BOE meeting has increased substantially – to about 80 per cent – implying that the market has a high expectation of the first rate cut in over seven years by the BOE.

Singapore’s Straits Times Index closed at a two- month high to 2,901 points, led by Telco and Consumer sectors. For the Singapore equity market, the downside is cushioned by low valuation and relatively high dividend yield. This is especially attractive in today’s low interest rate environment.

For the rest of July, the 2Q earnings release will paint a clearer picture of the fundamentals and eventually dominate market performance. Market direction will also be affected by the BOJ and FOMC meetings at the end of this month. More stimulus from the BOJ and a more dovish tone from the Fed will probably fuel the rally. However, any surprise will do the reverse. 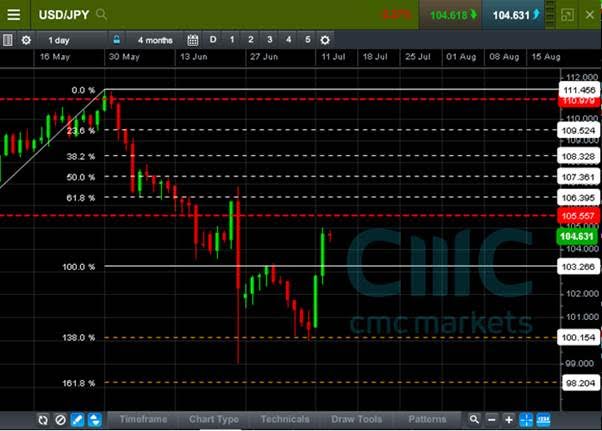