Dream Again: Children inspire grown-up women to never give up their dreams

SK-II’s commitment to its #changedestiny movement spurred the brand to take a closer look at women who had stopped pursuing their dreams, after findings from the brand’s Global Dreams Index Survey* revealed one in two women around the world have given up on them.

Could this be a worrying reflection of the increasingly tough economic situation globally, including in Singapore? With “limited financial support” being the top reason for not pursuing dreams, this statistic could be a hint to the current global sentiments and consumer confidence. 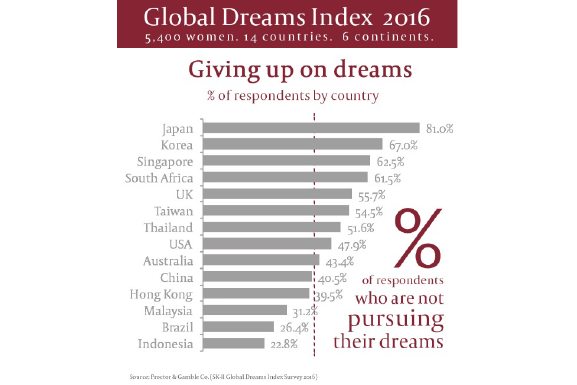 The study states that reasons affecting this fading of dreams include dreams not fitting the traditional definition of success, fear of leaving their comfort zone, lack of support from the family and lack of encouragement from others. Additionally, as women age, they tend to have fewer dreams compared to that of a child. The sentiment in Asia was even more alarming with women becoming less satisfied with their lives as they grow older.

Learning to dream again could be an uphill battle for the 50% of women globally who are disgruntled with their lives, and yet are stuck in their current situation.

The knowledge that dreams fade with age and adults who still dream are happier than those who don’t, inspired SK-II to create the “Dream Again | SK-II #changedestiny” film – a social experiment featuring children – who are still full of dreams – as surprise counselors for dreamless adults.

In this film, an actor was used as the ‘adult expert’ or life counselor, however all other women featured in the film are real-life women from Japan. The women interviewed were selected to attend a special counseling session, and agreed to be filmed sharing their own personal thoughts and experiences on the topic of dreams.

Children who took the role of counselors, were selected using local talent agencies in Japan. Some of the children are actors, and for others, it was their first appearance on camera. SK-II shared that the most important factor was that the children had the most genuine and inspirational opinions on dreams.

The women interviewed were asked questions about their childhood dreams and whether they still have it now. Most answered they were not happy that their dreams were not fulfilled but they didn’t have a dream anymore. Many reasons were given why they did not dream anymore.

Throughout the film it becomes clear how societal limitations and feelings of low self-esteem prevent many women from pursuing their dreams; interviewees voiced how they drifted away from childhood dreams as they grew up and life responsibilities became more demanding.

At the end of the experiment, it is revealed to the interviewees that the ‘adult expert’ was in fact a cover for little girls hidden behind cameras and earpieces. The dramatic unveil puts the women face-to-face with smiling children who remind them, in simple yet powerful words of encouragement, to never give up on dreams.

*The Global Dreams Index Survey is said to be aimed at understanding a woman’s willingness to pursue her dreams and how it can have influence on her quality of life.

This survey was conducted online by Procter & Gamble in May 2016 among 5,484 women ages 18 years of age or older in 14 countries spanning 6 continents.