Earlier this month on July 3, former political Internal Security Act detainee and lawyer, Teo Soh Lung posted a post on her Facebook account depicting her ordeal during the police investigation of her alleged violation of the Parliamentary Election Act during the recent Bukit Batok By-election, and how the police swarmed her home to take away her personal effects against her will.

Following the removal and ban, some netizens, such as well-known journalist and blogger, Kirsten Han copied her original post and shared it on their personal Facebook accounts to see if their posts will be removed and have their accounts banned.

Just today (July 7), Kirsten Han had her posting of Teo’s text removed by Facebook removed for the same reasons and is being being banned from posting on her account for 24 hours.

According to website, whoishostingthis.com, Facebook moderates its social network of 1.4 billion users with about 800-1000 moderators across the globe.

Below is a snippet of an infographic produced by the website.

As one can read from the text of the post by Teo shown below the article, there does not seem to be any part in which the post violates the community standards of Facebook. Unless Facebook agrees with Singapore government that a ministry like MINDEF or in the case of Teo, the Ministry of Home Affairs can be harassed by ordinary citizen.

Other than Teo and Kirsten being banned for the said posting, individuals such as renowned social-political commenter, Andrew Loh was also banned for posting a post on his Facebook account. He had suggested Jason Chua, the administrator of Fabrication about PAP (FAP) should raise an issue about the difference of treatment between him and Straits Times by the Singapore Police. Jason Chua was also hauled up for investigation for allegedly violating the PEA after being reported against by several members of the public. 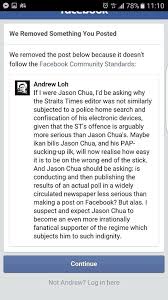 Since last year prior to the General Election 2015, netizens have shared that their accounts were being reported to be using fake names and had to either close down their accounts or to change their names to have their accounts reinstated.

Most if not all such individuals who have their accounts reported are either pro-opposition or anti-People’s Action Party who often post comments that are critical of the Singapore government and its policies.

In earlier reports by TOC, we touched on the existence of a group of netizens that conducts astroturfing on Singapore’s social media, also known as the “Internet brigade” (IB). Activities by the IBs ranges from trying to give an false impression of public opinion on issues or outright lying to defame individuals that are against the ruling party. TOC also wrote to Minister of Information and Communications, Mr Yaacob Ibrahim on several occasions to ask if he is aware of any groups that may be engaged in astroturfing , no reply has been given so far.

It is unknown if there is indeed an coordinated effort by IBs to silence voices that are critical of the establishment in Singapore on social media by reporting in mass and if true, one has to wonder whether such efforts are by the works of fanatic supporters of the ruling party or paid hired guns funded by taxpayers’ monies.

Below is the text that was first published by Teo Soh Lung and we will see if Facebook removes the link to this article and have TOC’s fanpage banned for posting.

These days, my sister calls me every morning just to make sure that I have not been arrested by the police. And my friends call me occasionally to ensure that I am still “free”. My old classmate, Ivy Singh-Lim of Bollywood Veggies, a loyal and vocal Singaporean offered me a safe haven at her farm, assuring me that she would set her dogs on the police if they dare go there to arrest me.

Terror has once again struck Singapore. On 21 May 1987, 16 people disappeared at dawn and no one knew where they were till a few days later. You can watch the documentary film “1987: Untracing the Marxist Conspiracy by Jason Soo at the Projector. Today, this fear is again widespread.

I do not know who is in charge of our police. And I do not know who instructed them to terrorise me. All I know is that I have not committed any crime and that the police have no right to seize my properties even though the seizure of computers and mobile phones are their SOP or standard operating procedures. Seizure of electronic equipment has happened to many people, several of them activists. We have Lynn Lee, the filmmaker, Leslie Chew, the cartoonist, Amos Yee, the attention seeking kid who badmouth both friends and foes, Ravi, Kumaran, Roy Ngerng, Jason Chua, the famous PAP IB, Bryan Lim, the hot-head and probably countless others who have not been reported in the press.

BEWARE law abiding people. You may not have committed any crime. But if the police are after your computers and mobile phones, they may one day go to your house or call you up for an innocuous interview at the police station. And when you are there, they can grab you to their police vehicle, drive you home and order you to open your door for them to enter and ransack your house. I am not kidding you. It happened to me and Roy Ngerng. And it can happen to you.

I went to the police station on 31 May, having received a notice to answer the baseless complaints of the Election Department. This department is exceedingly powerful for it is controlled by our prime minister. I am not sure the complaints were lodged at his command but whoever did that must, I assume, must have informed him. The manner in which the notice was delivered to me was to say the least, purposefully intimidating. The police came to my flat at about 9.55 pm on Saturday, 28 May. They left the notice half in and half out of my door. The notice required me to attend an “interview” at 9.30am on Monday. They came to check if I took in the letter two hours later. They loitered in my estate till well past midnight, perhaps to make sure that I did not leave my house.

The police came to intimidate me again at 9.30 am the next day, a Sunday. They rang my door bell but I did not open the door because I was afraid that they would arrest me. I asked what they wanted and a male voice said they wanted to deliver a letter. It was the same letter that I received and I told him so. He wanted to make sure that I attend the “interview” and was helpful in giving me another telephone number.

Dutifully, I turned up at the police station on 31 May. I gave my statement regarding the four postings which the Election Department complained about. I admitted that I was the one responsible for the postings. I denied that I had committed any offence and told them it was my constitutional right to express my opinion on Cooling Off Day. What more do the police want?

Charge me in court if they think I have committed an offence. But they did not do that, at least until now. Instead of allowing me to go home, they threatened to seize my mobile phone and then my computer. When I refused to give them my mobile phone, 4 or 5 police officers entered the room and threatened to handcuff me and arrest me while several others patrolled the corridor. I could see them because the wall partition was glass.

I am amazed and ashamed at the kind of police force we have today. Why threaten me, a pioneer citizen, 5 feet tall at most and weighing about 40 kg? Why so many police officers? But then, I should not have been shocked. The coroner’s inquiry of the cause of death of 14 year old Benjamin Lim who committed suicide is ongoing. Four police officers went to his school to arrest him, a 14 year old boy.

Eight police officers, 4 of whom were from the forensic department, came to my house. Why do they need 8 police officers to seize my computers and mobile phone? I did not commit a murder or possess guns. If this is not intimidation by sheer numbers, then what is? Fortunately, my friends were earlier than the police and they could enter my house at the same time as the police. And best of all, they could witness the police seizing my properties.

The police have robbed me of my properties and gravely inconvenienced me. They have mined my data. They have seen and read all my private documents and know who are my friends. They have invaded my privacy. They have committed a crime. I am angry. But where is my recourse? We do not have a national human rights institution which our so called less developed neighbours have – Malaysia, Indonesia, Thailand and Myanmar.

Where do I complain about my grievances? To the prime minister at his “Meet the People” session? At the 2nd hearing of Singapore’s human rights record at the United Nations Universal Periodic Review, the Singapore government said I could do that. But what is the point of complaining to the prime minister about something that he authorised?

This is my Singapore. This is your Singapore. We are a police state. For the slightest irritation, Singaporeans run to the police. But when the police commit a wrong, where do we run to?