Sterling tumbled ahead of the final countdown

FX – Now is the time of the extreme volatility. Sterling tumbled nearly 1000 pips, or 6.5% early this morning, to the 1.41 area from the 1.50 area, as the early votes show the exit side in the lead in the UK’s referendum on EU membership. Although it is still too early to jump to any conclusions, a huge amount of expectation has started to unwind in anticipation of unexpected results.

A remain vote would probably fuel a risk-on sentiment towards the emerging markets, which have been underperforming against developed markets recently. On the other hand, a vote for Brexit, could bring a big tail risk to the market. That is exactly why banks and brokerage firms have been on the alert, anticipating the risks and impacts that Brexit could bring to the market.

The polls closed at around 5am Singapore time, with Britain’s fate sealed in the ballot boxes. The voting results from different areas of the country are now coming out, and unless the polls remain as close as they currently are, we should have a good sense of the final result by noon in Singapore.

Equities – European markets opened higher on Thursday, registering a weekly gain of 7% on hopes that Britons will vote to remain in the European Union. However, as uncertainties rise, index futures have started to drop.

The Hang Seng Index has risen for a fourth day, with the banking sector leading the rally. Standard Chartered Bank (2888 HK) soared almost 20% in the last five trading days, attempting to price in a remain vote ahead of the EU referendum. HSBC has also rallied almost 10% during the same period. Both banks have significant asset exposure to the European markets. 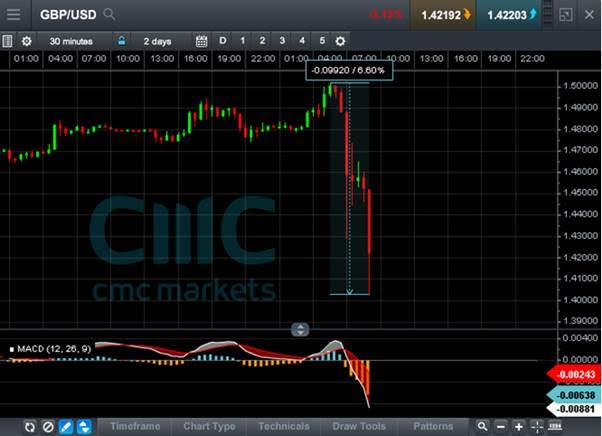