Equities – The Chinese and HK markets surged on Tuesday, led by the securities sector, particularly Citic and Haitong. The Shanghai Composite rallied 3.3%, with higher volume. The most likely reason for this is market speculation on the possible inclusion of the A-shares into the MSCI index, a decision which will be announced this month. Should this happen this year, it would introduce billions of passive inflow into the A-shares market.

Another possible reason is that the HK-Shenzhen link may come out sooner than expected, resulting in speculation. Recently, we have seen large inflows into the HK-listed RQFII ETF – CSOP China A50 (2822 HK), which shows that foreign funds have already started to increase their positions in the A-share market.

Separately, the Chinese PMI figure came out at 50.1 this morning, beating market expectations of 50.0. A reading above 50 indicates economic expansion. This is the third consecutive month of China’s monthly PMI reporting above 50.0 this year, showing a sign of economic stabilisation.

Singapore’s STI rallied 1% in the earlier trading hours, however, ended marginally lower during the last trading hour. The Singapore Exchange (SGX) rallied 2.1% on China hopes, as the most liquid A50 futures are listed in the SGX.

FX – GBP/USD tumbled over 1.12% to the 1.4470 area as a recent poll shows more voters leaning towards Brexit. AUD/USD has rebounded to the 0.7230 area from a three-month low. The MACD has formed a positive crossover. USD/JPY has retraced back to the 110.60 area, with the market tending toward more caution ahead of the Prime Minister Abe’s talk later today.

Commodities – The WTI Crude Oil price dropped from its year-to-date high as Canadian oil production resumed after the wildfire. A few technical indicators have shown a strong resistance level near the $50.00 area, as discussed earlier. The strong USD continued to suppress the gold and silver prices. However, the gold price has rebounded for a second day to $1,219 this morning, with its immediate support level at $1,200. Silver also seems to find some support around the $16.00 area. Its next support level could be found near $15.63. 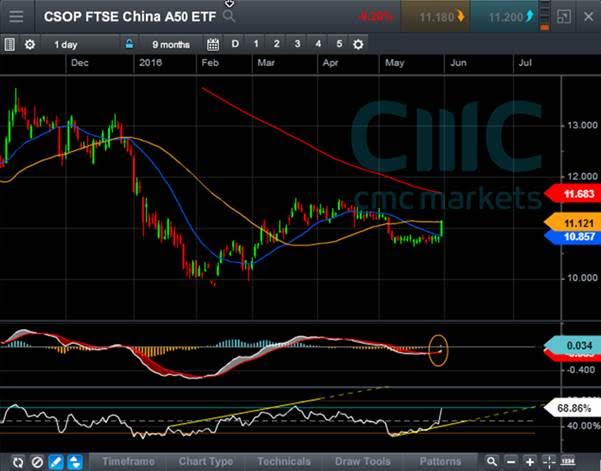