Stark contrast in police enforcement of Cooling Off Day regulations

On 27 May, the Prime Minister’s Office (PMO) released a statement about the filing of police reports by the Assistant Returning Officer from the Elections Department (ELD) against socio-political site, The Independent Singapore (TISG), and two individuals, Teo Soh Lung and Roy Ngerng. The unnamed Assistant Returning Officer  filed the reports due to the publishing of “several online articles and postings that may be tantamount to election advertising, on Cooling-Off Day and Polling Day of the recent Bukit Batok by-election”.
Just today, the two individuals, Ngerng and Teo, were called up for an interview at the Cantonment Police station to assist in investigations for their alleged offence of posting on their Facebook account on Cooling Off Day.
Teo said that the police questioned her about her Facebook post, asking about the number of likes, who her visitors are, what she usually posts about, whether she thinks her post can influence the way people vote. Teo told the police that the Parliamentary Elections Act applies to political parties and candidates, not citizens like her, who have a constitutional right to post what they like on Facebook.
Instead of being released after their two hour interview at Cantonment Police Station this morning, the police escorted the two back to their respective homes to raid their premises. In total, three laptops, one desktop, two hard drives, memory cards, and both their mobile phones were seized by the police. It is noted that the police had no search warrant. The police said that since the alleged offence was an arrestable one, they had the right to seize the items that may have been used to commit the offence.

TOC understands that a defence was made at Teo’s residence that since Teo does not deny that she made the post, there should be no need to seize physical evidence to prove her “wrong”.
Stark contrast in actions


During the 2011 General Elections, a member of the public filed a police complaint against Member of Parliament Tin Pei Ling for flouting Cooling Off Day regulations.
A screen capture shows the following update on Ms Tin’s Facebook page: “OooOoooOooh so that’s what REALLY happened? Wow. I think tears in Parliament is worse than ANYTHING ELSE!” 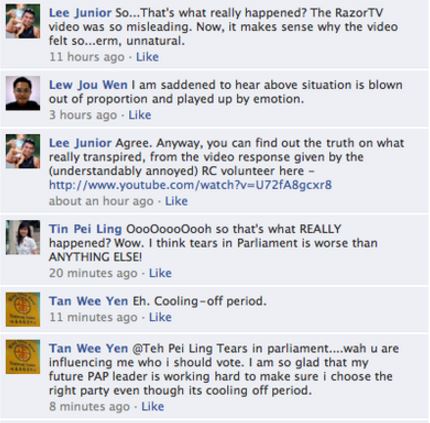 When contacted on Cooling Off Day, Ms Tin said that it was a mistake by one of her administrators. She said she had asked her administrator to remove the comment immediately.
It is uncertain how the police ascertained the veracity of Ms Tin’s claims.
The police ended the case by issuing a stern warning to Ms Tin’s friend for violating the Parliamentary Elections Act.
Subsequently, in 2015’s General Election, Dr Vivian Balakrishnan, Member of Parliament for Holland-Bukit Timah, posted a Facebook post after midnight on Cooling Off Day.

In his defence, Mr Balakrishnan said, “As my Facebook and Twitter accounts are linked, an associated tweet was also generated at the same time. Despite multiple attempts by the page administrators to stop this, the problem recurred at 1.52am on Sep 10, 2015. We have contacted Facebook headquarters to conduct an investigation into the source of this bug. We have also requested that the page be locked down to prevent any further postings.”
On 11 September 2015, a spokesperson for Facebook confirmed that there was indeed a bug in their technical system which led to the auto-posted tweet, which was linked to Dr Balakrishnan’s Facebook page.
TOC’s editor, Terry Xu, was the one who filed the police report against Mr Balakrishnan for the violation. Xu says the police did not seem to have any intention of following up on the report by conducting an investigation into whether a posting had indeed been made by Mr Balakrishnan at the time of the said offence. The police simply wrote back to Xu a few weeks after the incident to say that the case had been closed.
Even if a bug resulted in Mr Balakrishnan’s “auto-posted” tweet and post, the regulation states that no person shall “knowingly publishing, or knowingly causing or permitting to be published, any election advertising in or among electors in the electoral division”. According to Mr Balakrishnan, he knew that the bug existed but yet did not do anything to ensure the bug did not allow a post to be “auto-posted” during Cooling Off day (something that could have been prevented by simply delinking the two accounts). This could be argued to be “knowingly permitting”?
Given that both individuals, Ms Tin and Mr Balakrishnan, claimed that they did not commit the offence, why were their possessions not seized by police officers, and forensic examinations run on their electronic devices? In the case of Ngerng and Teo, both did not deny that the postings were made by them, yet their electronic devices were seized from them.
This does make one wonder: is this whole operation a fishing expedition on the two vocal critics of the ruling party?