By Margaret Yang, CMC Markets
Equities – Is “sell in May over”?  Or is this just a short break before we embrace the “Great Singapore Sales” (GSS) which usually falls in June? The Singapore market led an Asian rebound on Tuesday. The Straits Times Index advanced 46 points, or 1.7%.
The Strong momentum of Thai Beverage and a rally in oil & gas names outweighed the disappointing April export data and weak earnings. Sembcorp Marine, one of the largest offshore and marine players in Aisa, rallied 8.25%. Keppel Corp and SembCorp Industries also rallied over 5%.  The banking and financial sector caught up during afternoon hours, with OCBC and UOB bank closing 2% higher. Other resources companies like Noble Group and Wilmar were also lifted by favourable sentiments. One of the few names that lagged behind included Singapore Airlines, due to higher fuel prices.
The US market closed down 1% on Tuesday, as a higher than expected CPI reading (0.4%) raised a new round of concerns on a rate hike. The sell down hit all sectors except energy, due to higher oil prices.
FX – The dollar index was little changed at 94.50 this morning. USD/JPY wobbled around 108.90. Immediate support and resistance levels for USD/JPY remain at 107.00 and 110.00 respectively. USD/SGD advanced to 1.3720 as Singapore’s April non-oil exports shrank by 7.9% y-o-y. EUR/USD retraced to the 1.1310 area.  CHF/GBP slid to 0.7060 from 0.7100 a day ago. The Immediate support and resistance are at 0.7040 and 0.7200 respectively.
Commodities – Crude oil advanced further as Canada plans to resume production after being delayed as wildfires threatened operations again. WTI crude oil futures closed at $48.50 last night – a fresh 7-month high. Recently, a drop in US inventories and a reduced number of oil drilling rig counts has led markets to speculate that the supply-demand balance will probably be reached sooner than expected. Traders will be watching tonight’s US weekly DoE oil inventory data to find a clue of where the oil price might head to.
The price of gold is little changed at $1,279 this morning. The near-term resistance remains at $1,286, which is also the 61.8% Fibonacci level. A key support level can be found near to its 50-SMA, which is currently pointing toward the $1,251 area. Silver is trading around $17.25 this morning. The near-term support and resistance levels are $16.75 and $17.66 respectively.
Crude Oil West Texas Jun 2016 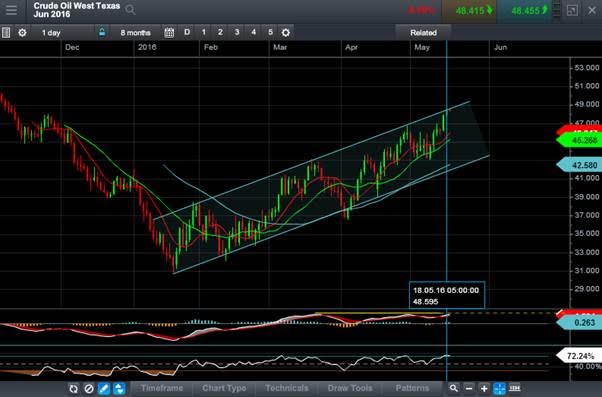