By Margaret Yang, CMC Markets
Equities – Asian markets rebounded on Monday, led by Shanghai and Hong Kong markets. Technically, the short term trend of the Hang Seng Index remains bearish, as 10, 20 and 200 SMA are all sloping downwards. Singapore’s Straits Times Index closed flat at 2,736 points.
The bright spot on Monday was Thai Beverage, which soared 10% to a record high of S$0.830. The rally has extended this morning and it is it at around $0.915. Its 1Q earnings per share (EPS) of $0.34 beat market expectations of $0.265. Profit and revenue grew by 30% and 21% respectively as compared to one year ago on higher sales of beer, spirits and food. Maybe people tend to drink more during bad times 😉
The US market closed up 1% on Monday, as Warren Buffet’s Berkshire Hathaway disclosed that they’ve bought a $1bn stake in Apple Inc. The Apple share price jumped 3.7% after the news. This probably signals a shift in Buffet’s investment philosophy, or a change for Apple from growth company towards a value company. In the near term, this deal is likely to lift investor’s confidence after its share price reached a 2-years low.
FX – The dollar index retraced to 94.50 this morning from a 6-month high. USD/JPY remained around 108.95. Immediate support and resistance levels for USD/JPY are at 107.00 and 110.00 respectively. USD/SGD is trading at around 1.3680, little changed despite Singapore’s April exports dropping by 8% y-o-y. EUR/USD retraced to the 1.1310 area.  CHF/GBP is trading around the 0.7070 area. The Immediate support and resistance are at 0.7040 and 0.7200 respectively.
Commodities – Crude oil advanced with no fear. WTI crude oil futures closed at $47.90 last night – a fresh 6-month high. International Energy Agency (IEA) said late last week that the surge in oil demand in India and other emerging nations will probably lead to a reduction in the global oil surplus in H1 2016. Recently, a drop in US inventories and a reduced number of oil drilling rig counts has led markets to speculate that the supply-demand balance will probably be reached sooner than expected.
The price of gold is little changed at $1,276 this morning. The near-term resistance remains at $1,286, which is also the 61.8% Fibonacci level. A key support level can be found near to its 50-SMA, which is currently pointing toward the $1,250 area. Silver is trading around $17.19 this morning. The near-term support and resistance levels are $16.75 and $17.66 respectively.
Golden Agri-Resources 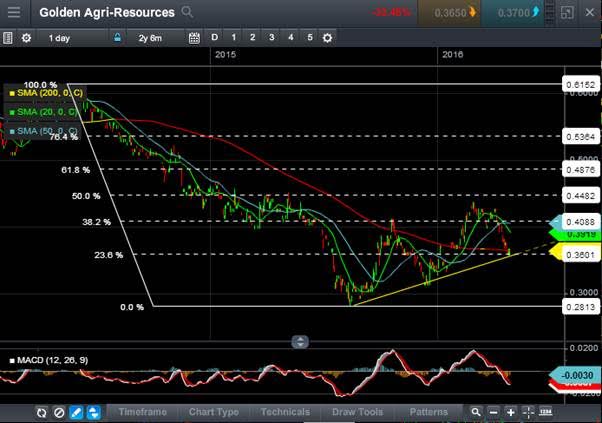