By Sean Francis Han
This is the by-product of gutter politics – in all it’s ugly, debilitating glory.
The initial statement made by Mr. Raymond Tan, asks whether or not the death of an incumbent MP within a GRC will force a by-election. 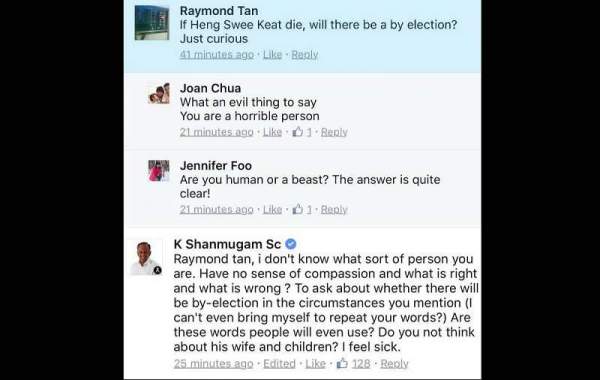 Commenters were quick to call him a “horrible person” and a “beast”, finally culminating in Minister Shanmugam delivering him an acidic tongue-lashing. Was any of that necessary? No.
The initial question posed by Mr Tan was a valid one. Singapore’s political system is borrowed from the British, within which a by-election has to take place to replace an MP who has since passed away or has resigned from his post, or is incapable of maintaining his role as an MP. But because Singapore’s political system features the GRC, which the British don’t have, the question becomes a little trickier (and harder to Google). The last time this happened was 8 years ago, when MP Ong Chit Chung of Jurong GRC died of cancer.
There are several schools of thought as to what should be the appropriate response to the demise or possible death of a public figure, both with their own merits. One camp holds that only grief and respect should hold in the conversations of the person (at least for some time), while the other camp finds that unnecessary cordiality serves little purpose and should not hinder any conversation about the person. These are both fair. What is not fair is to attack someone whose response to the situation doesn’t fit yours to a tee.
What would have happened if the commenters or Shanmugam had answered his query? That would be the end of that discussion. Period.
If Mr. Raymond Tan had asked the question with the honest intention of finding out the political ramifications of Minister Heng’s potential death, his query would have been answered and he, and other viewers of the thread, would have been better off with the clarification. And if Mr. Tan had in fact been asking the question out of some sort of malice then his efforts at provoking hatred and ill-will would have been decisively quelled and stopped assuredly in its tracks. Instead, the commenters and Shanmugam decided to send the post down a road to political stupidity, resentment, and rancour.
This is not to say that Mr Raymond Tan is a saintly victim here. As the comments poured in following Minister Shanmugam’s intensely harsh comments, the thread got more and more toxic, concluding with Mr Tan declaring that he would be “preparing (his) champagne”, an unmistakable allusion to dancing on Minister Heng’s grave; a pointlessly deplorable statement, regardless of whichever camp you’re in.
The saddest thing I encounter as a writer is commenting on stories where this is no good-guy; everyone is an asshole, and the toxicity just seems profoundly incapable of stopping. Not only did everyone on that thread (and a minister on top of that), manage to fuel a divisive, hate-filled, and ultimately pointless rampage of comments – the person who sent in this commentary also prioritised his political agenda and vitriol over writing a fair or accurate title for his opinion piece. Raymond Tan asked IF there would be a by-election, not FOR one.
When politicians in a country are allowed to rally AGAINST their opponents, rather than FOR their causes, beliefs, or merits, the people watch, and the people learn.