By Margaret Yang, CMC Markets
Commodities – The crude oil price rallied another 1.0% on Thursday, touching a new six-month-high. The favourable US Department of Energy oil inventory report and the Nigerian oil production disruption have led to a strong surge in the crude price recently. WTI crude oil is trading at $46.25 this morning, slightly down from $46.40 yesterday.
Separately, the International Energy Agency (IEA) commented on Thursday that the surge in oil demand in India and other emerging nations will probably lead to a reduction in the global oil surplus in H1 2016. India is the star performer in oil demand; its demand increased by 0.4 million barrels per day year on year, representing nearly 30% of the global increase in the first quarter of this year.
The price of gold retraced to $1,268 as the Dollar Index strengthened to 94.12. The near-term resistance remains at $1,286, which is also the 61.8% Fibonacci level. A key support level can be found near to its 50-SMA, which is currently pointed toward the $1,250 area. Silver has also retraced to $17.00. The near-term support and resistance levels are $16.75 and $17.66 respectively.
Equities – Asian markets were mixed on Thursday. Asian markets, other than greater China, generally closed higher. The Nikkei 225 Index climbed 0.4% as Kuroda commented that the Bank of Japan (BOJ) could ease policy ‘substantially’ if necessary during an interview on Wednesday. His words have sent JPY weaker, although not significantly. Apparently the market has become more and more cautious on the BOJ’s policies after experiencing a few rounds of appreciation in JPY early this year, after all the stimulus efforts.
The greater China market, on the other hand, continued to consolidate. The Hang Seng Index dropped by 0.7% to 19,915 points, widening its month-to-date losses to -5.47%, the worst performance among its Asian peers. China and Taiwan closed -0.04% and -0.34% respectively.
Singapore’s Straits Times Index closed 12.52 points, or 0.46% higher. Singtel – Singapore’s largest Telecom company – announced its Q1 earnings results, which meet the market’s expectations.
The US market closed flat yesterday. The S&P 500 Index has formed a likely head-and-shoulder pattern, which is usually a bearish signal.
FX – The Dollar Index strengthened to the 94.12 area. USD/JPY remained around 108.80. Immediate support and resistance levels for USD/JPY are at 107.00 and 110.00 respectively. USD/SGD surged to 1.3744 this morning, reaching a two-month high. EUR/USD retraced to the 1.1376 area as a result of the strengthening dollar. GBP/USD was little changed at the 1.4440 area after the BOE announced it would keep the official bank rate unchanged at 0.5%.
US SPX 500 – Cash 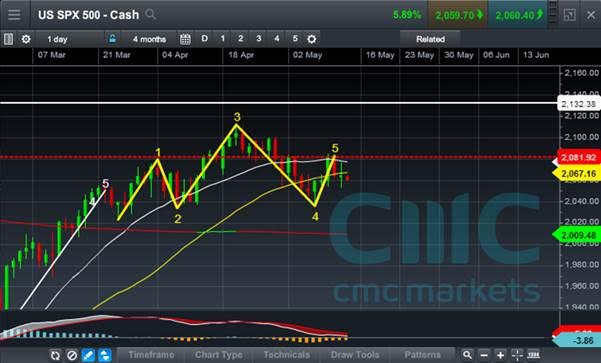