By Margaret Yang, CMC Markets
Commodities – The crude oil price closed 3.5% lower on Monday, with a literal change in the way the wind is blowing in Canada’s oil sands region alleviating concerns over production cuts due to the wildfire.
A stronger US dollar also played a role in suppressing commodities price. WTI crude oil is trading at $43.00 this morning, down from $45.00 yesterday. The price of gold fell to $1,261 today.
Saudi Arabia’s newly appointed Oil Minister said that the kingdom would ‘maintain its stable petroleum policies’, while also highlighting that Saudi Arabia has significant spare capacity to meet the existing and additional demands. The new Oil Minister is expected to help Prince Mohammed to carry out reform plans in order to gradually reduce the country’s reliance on oil. The appointment, however, has made the June OPEC meeting less clear to investors, as the representative of the world’s most powerful producer of oil has mentioned that keeping output high is the best strategy for the kingdom.
Equities – China’s Shanghai Composite Index plunged 2.8%, extending its second-day losses, possibly due to worries that the economic outlook will probably follow an ‘L-shaped’ trajectory, as suggested by an ‘authoritative figure’ in official media early on Monday.
‘L-shaped’ growth means growth is stagnant after finding a bottom. China’s April trade balance has scored $45.6 billion, beating the market’s expectation of $40 billion, although both exports and imports have slid year on year.
Singapore’s Straits Times Index closed 35 points, or 1.28% higher, ending its seven-day losses with a decent rebound. The rally was led by Singtel, which ran up 3.5% during the last hour of trading. Singtel will announce its Q1 earnings this Thursday, 12th May.
On the other hand, some oil, gas and commodity companies were hammered. Noble Group plunged 13.6%, probably due to Fitch’s downgrading of its credit rating outlook.
Foreign Exchange (FX) – The Dollar Index rebounded for a fifth day to 94.00. USD/JPY climbed to 108.53, its highest level in seven days. Immediate support and resistance levels for USD/JPY are at 107.00 and 110.00 respectively.
USD/SGD surged to 1.3715 this morning, its highest level in more than a month, following the MAS’ easing of monetary policy. EUR/USD retraced to 1.1385 from an eight-month high of 1.1590 one week ago. AUD/USD headed to a two-month low of 0.7306, dragged by softening metal prices.
USD/SGD 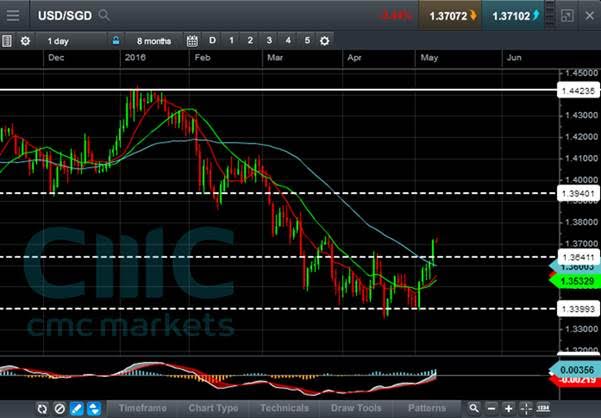