By Margaret Yang, CMC Markets
Commodities – Crude oil prices traded lower after a higher than expected US DoE weekly crude inventory increase released last night. The Inventory increased by 2.78 million barrels, higher than the forecast of 2.5 million barrels. The price subsequently rebounded possible due to concerns about production cuts in Canada’s oil sands region due to a wildfire. WTI crude oil is trading at $44.5 this morning. A stronger US dollar weighs on commodities. Gold retraced to $1,281 this morning from its 15-month high of $1,300 two days ago.
Equities – The ASX 200 index sank 1.54% on Wednesday, erasing most of its gains on the RBA’s rate cut a day earlier. BHP Billiton, Australia’s biggest resource company, plunged 9% after it was named in a $44 billion law suit over a dam rupture in Brazil. Woolworths, the country’s largest supermarket chain, sank 7% after its issuer rating was downgraded by S&P to BBB from BBB+. A Commodity slump also played a role, as basic metals namely Aluminium, Copper and Zink all came off sharply from recent highs.
Singapore’s Straits Times Index extended its losses for a fifth day, closing 35 points or 1.3% lower. Lacklustre earnings have also affected the market outlook.SembCorp Industry’s 1Q earnings fell 25% YoY, mainly dragged by a lower contribution from its marine business which plunged to S$33.5 million from S$64.7 million a year ago. Jardine C&C has plunged as much as 20% from its April high after disappointing 1Q earnings due to sluggish demand in the Indonesian market. Great Eastern’s 1Q earnings plunged 56% due to unrealised mark to market investment losses. This has also indirectly affected OCBC’s earnings.
Donald Trump became presumptive Republican nominee as his main competitor Ted Cruz exited the race. Ted Cruz announced he would exit the presidential campaign after defeat in Indiana. This will bring Trump a big step closer to the presidential battle with Hillary Clinton, who is considered to be the most likely candidate for the Democracts. However, Trump’s victory is probably the least wanted outcome for the Street, as Trump’s unpredictable opinions are likely to bring more uncertainty to the market which investors tend to dislike. The S&P 500 Index was down 0.6% last night.
Foreign Exchange (FX) – The Dollar Index traded higher to 93.28, extending two days of gains after testing the recent low of 92.00. USD/JPY rebounded to the 107.00 area, as a three-day Japanese holiday has given the market the time needed to cool down after the drastic move recently. Immediate support and resistance levels for USD/JPY are at 105.20 and 108.30 respectively. EUR/USD slid to 1.1480 from an 8-month high of 1.1590 two days ago. GBP/USD also came down to 1.4500. AUD/USD headed lower, dragged by soften metal prices.
BHP Billiton Ltd (Australia) 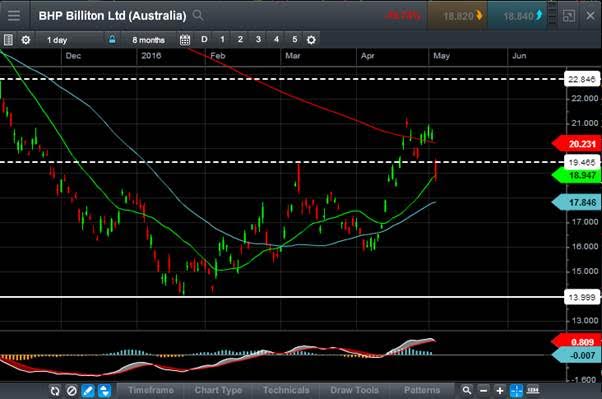 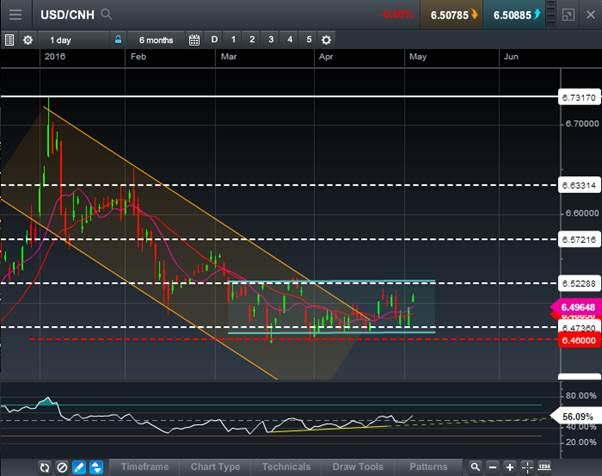