By Margaret Yang, CMC Markets
Commodities – Gold has broken out above the key resistance level of $1,286 for the first time after three months of sideways movement. It was trading at $1,290 this morning. Gold and USD/JPY formed an “inverted mirror image” over the last two days, which showed that a weaker US dollar has fuelled a commodities rally. Recent volatility in USD/JPY and its impact on the equities market has also raised demand for safe-haven assets.
Crude oil prices, on the other hand, dropped 2.5% as higher-than-expected Iranian output raised worries of oversupply. Bloomberg OPEC crude oil production data shows that Iran’s Apr crude production reached 3.5 million barrels a day, a sharp rise from 3.2 million in March 16. At this speed, it will probably reach the 4.0 million barrels a day target by June 16. Nonetheless, expectation has been gradually building that an agreement will eventually be reached at June’s OPEC meeting, as low oil prices are hurting all the OPEC members.
Equities – The Nikkei 225 closed 3.1% lower on Monday as the yen strengthened further to 18-month highs at 106.00 per USD after the BOJ held fire on more stimulus. The rest of the major markets such as China, Taiwan and Singapore were closed for a public holiday. The US market closed higher, led by consumer, energy and financial sectors.
DBS’s 1Q earnings grew 6% year-on-year to S$1.20 billion and its total income rose 5% year-on-year to S$2.87 billion. Earnings-per-share (EPS) at S$ 0.48 has beaten analysts’ estimates of $0.42. The growth is mainly due to higher net interest income which rose by 8% to S$1.83 billion. Non-interest income dropped by 2% on lower trading income and investment profits. The non-performing loans ratio has risen 0.1% from a quarter ago to 1.0%. For peer comparison, UOB and OCBC have registered first quarter earnings drops of 4.4% and 14% respectively.
Foreign Exchange (FX) – USD/JPY was trading at around 106.10 this morning, extending its losses following the BOJ’s decision to take no further action on its monetary policy. If this trend continues, the strong yen may hurt economic growth and dampen the outlook on inflation. This will probably motivate the central bank to take the necessary actions or intervene. The immediate support level is 105.26 and resistance is 107.00. USD has weakened against its peers, with USD/CAD reaching a 10-month low at 1.2510. USD/SGD also pulled back to the 1.3400 area.
USD/JPY 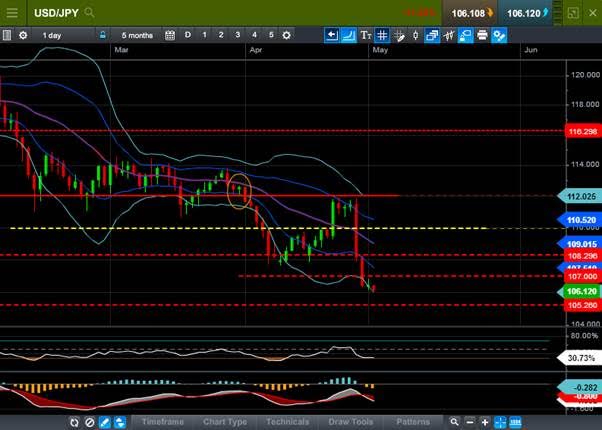