By Margaret Yang, CMC Markets
Commodities – Crude oil prices rebounded on Tuesday. WTI oil futures closed 3.3% higher to $44.04, a five-month high. Traders are keeping an eye on the DoE weekly crude oil inventories tonight to find clues to changes in the supply-demand relationship. On the other hand, Saudi Arabia has announced a transformation plan to change its “addiction to oil” and shift to a more diversified economy with new growth engines. This comes together with a plan to bring its state-owned oil company Saudi Aramco to a publicly listed company which targets a valuation of over $2 trillion. Saudi Arabia’s ambitions will probably inspire other OPEC countries, which are also struggling from low oil prices, to consider structural reforms.
Equities – Asian equity markets were mixed on Tuesday. The Shanghai Composite closed 0.61% higher whereas the Nikkei 225 Index finished 0.49% lower. The Straits Times Index lost 0.2% yesterday. The US market finished marginally lower. Uncertainty surrounding central banks’ monetary policies looms ahead of the FOMC and BOJ decisions this Thursday. Although the market has priced in a near-zero-percent rate hike in April’s FOMC meeting, any small changes or a strong hawkish stance could catalyse volatility globally.
Apple’s share price dropped 8% after market hours, due to earnings missing expectations. Its second quarter revenue dropped 13% to $50.6 billion from $50.8 billion a year ago, marking its first decline in more than a decade. Net profits dropped 18% to $1.9 per share, lower than estimates of $1.99 per share. Revenue was dragged down by sluggish demand in high-end smart phones, especially in the greater China markets which contribute 25% of its revenue in 2015. Apple estimated that the decline is going to continue in the current quarter and they have revised the third quarter revenue estimate to $41-43 billion.
Great Eastern Holdings’ Q1 net profit tumbled 56% to S$96.6 million from S$220.5 million a year ago, mainly due to unrealised losses from the widening of credit spreads and a decline in the equity market. The weaker Malaysian ringgit also played a role in declining earnings. On the other hand, gross premiums increased 21% yoy to S$2.3 billion. Its share price was little changed at $22.19 yesterday.
Foreign Exchange (FX) – USD/JPY was little changed at 111.20 this morning. 112.00 remains an immediate resistance level for it to breakthrough in order to go higher. The market is eyeing the BOJ’s decision this Thursday and expectations of more easing have gradually built up ahead of the meeting. AUD/USD plunged to 0.7670 this morning due to lower than expected CPI data. EUR/USD remains range bound between 1.1200-1.1400 as the ECB keeps rates unchanged.
Apple 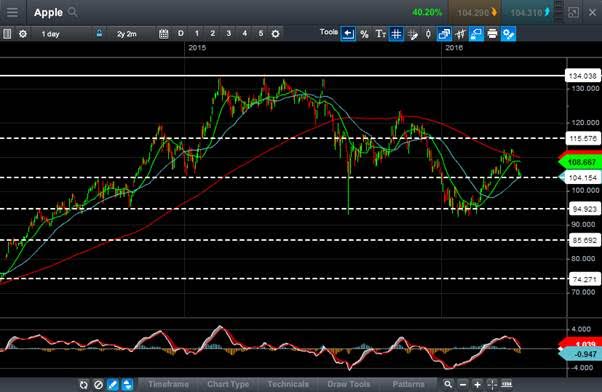