A set of wedding photos has gone viral on Facebook, after Jaclyn Ying (the bride) posted 21 photos on Sunday that demonstrated the poor quality of the wedding day photography the bride and groom had paid for – “we got one of those “bao ka liao” wedding packages that included actual day photography from a pretty reputable bridal shop”. She added in the post that “this is not a flame and shame post. We just wanted to share some of these hilariously bad photos with everyone, so sorry ar if your unglam face is in this.” Ms Ying did not include the name or any other information that could identify the bridal shop or the photographer in question.

The series of photos which are arguably amateurish and not something a reasonable person would expect when engaging a professional bridal service, has reportedly been shared over 12,000 times over the past three days. The general response to the photos has been empathy and hilarity (at how amazingly terrible the photos turned out) with no discernible vitriol towards the bridal shop or photographer. This is in part due to the positioning of the issue by Ms Ying on the post itself, where she figuratively asks, “So, what do you do when you finally receive your actual wedding day photos and find yourself sorely disappointed in them? Get angry? Check. Shed a few tears over them? Done. Post some of the best (of the worst) on social media for amusement? Absolutely!”

The photographer in question came out on his own Facebook page to clarify his version of the perceived quality of the photographs and posted a different set of seven photos of the wedding. However, they did little to bolster his case, suggesting instead that his competency was mediocre at best and not something acceptable from a professional photographer. This rebuttal post has since been removed and he has posted an apology instead. 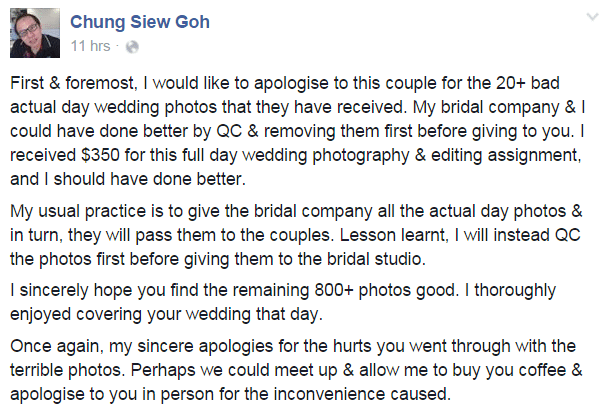 Ms Ying thus appears to have ‘won the battle’ in the court of public opinion on Facebook. And she accomplished this feat without having to sully the name of anyone – not even herself. While the photos she posted ironically presented the newlyweds at their worst on what ought to be the best day of their lives, very few remarks centred on the attractiveness (or lack thereof) of the couple involved. Instead, the only point that stood out was the intended one, with the community laughing along with the couple instead of at them.

The Other High Profile Case

Obviously, the big incident on Facebook this month has been the spat between the Straits Times and Lee Wei Ling, daughter of former prime minister, Lee Kuan Yew, and sister of current prime minister, Lee Hsien Loong. While it can be argued that Lee Wei Ling’s intentions with regard to her online comments and remarks were the sincere concerns of a filial daughter, her lack of effort to articulate and position her remarks suitably has led to much criticism of her actions and scepticism of her intentions.

Making broad statements with serious allegations on social media and then removing those posts is a recipe for disaster. The perpetrator of such practices causes irrevocable damage to the target and then creates confusion as others try to verify or clarify the statement. He or she will invariably be condemned by the vast majority regardless of whether the public actually supports the person’s position on the matter or not. Thus, while Lee Wei Ling garnered her fair share of sympathy in the original circumstance of being rejected from publishing her article that she submitted to the Straits Times, her subsequent online behaviour and especially the post referring to her brother the Prime Minister a “dishonourable son” has earned her the reputation of being a spoilt brat who is acting out in a sense of entitlement.

But perhaps the real tragedy for her is the fact that the discussion has now moved away from the original concern of how Lee Kuan Yew is remembered one year after his passing – which she reiterates is the driving force for her offline and online efforts.

Understand What You Are Doing (Otherwise, Just Don’t Do It)

It is easy to vent on social media platforms – everyone is just a click away from airing their dirty laundry. However, if you ‘want the whole world to know’ about an injustice you’ve suffered, then a measured and precise manner of doing so is a must. Because failing to think about how you are going to ‘whack’ the other party will essentially mean that you are launching a boomerang – it might hit the target but sooner or later the proverbial missile is going to swing back and hit you square in the face.

If you just want to whine and present your (perhaps, biased) case to your friends for the pity-party, then do yourself the favour of setting that particular post to ‘friends only’ so that it doesn’t stray far and end up being taken out of context. If you are truly interested in spreading awareness though, then think about what you’re saying and make sure you only mention things that you can support with evidence. If it is an opinion, then it must be clear that you are expressing just your impression of the situation or experience and not offering sweeping generalisation.

And if you are even modestly well-known, then you should simply accept that nothing is private online and that possibly some or all of your online ‘friends’ are there just for the entertainment value. And to them, your subjective or objective experiences are just material for said entertainment – they are likely to share your version out of context and add their own meaning or agenda to spin it in another unwanted direction altogether.

What Jaclyn Ying has executed is a textbook example of mobilising social media as a resource to support your case. Lee Wei Ling may do well to take a leaf out of Ms Ying’s playbook and manage her online behaviour with more decorum that achieves her intended outcomes instead of spiralling out of control.

Long-time TOC contributor Gangasudhan is currently embarking on an initiative to share his social media expertise with individuals and businesses to help manage their online presence and handle crises – you can reach him through his blog.