Marine Parade Town Council (MPTC) has apologised for a poster banning the playing of chess in common areas of HDB void decks after it received significant criticism after photographs of it spread online.
The poster that stated “No Playing of Chess at Common Areas” was put up in early January this year by the town council after it received complaints of chess and draughts players from residents.
A social media page on Facebook, “Wake Up Singapore” shared an image of the poster on last Sunday and attracted comments that are primarily negative. Many netizens have called the poster unreasonable and that it killed the “kampong spirit.”

The MPTC in its response, said that the poster not one of its “standard” posters and was only put up at one site, Block 11, Haig Road. It was put up solely in that area as the MPTC had previously received complaints of chess and draughts players in groups of ten people or more causing a nuisance and obstructing pathways. There were also complaints that these groups would get noisy while playing chess at night, disrupting residents.
MPTC has apologised for the wording of the poster, which did not properly reflect their actual intentions. It emphasised that there is currently no ban on playing chess at the common area. The poster at the Block 11 walkway has since been replaced with a new one stating “Please be considerate.”
Taking into consideration the residents of the Block 11 area, MPTC assures residents that steps will be taken to lessen noise and obstruction at the linkway by persuading chess players to carry out their games at Geylang Serai Community Centre or at designated senior citizens corners under the HDB blocks instead. 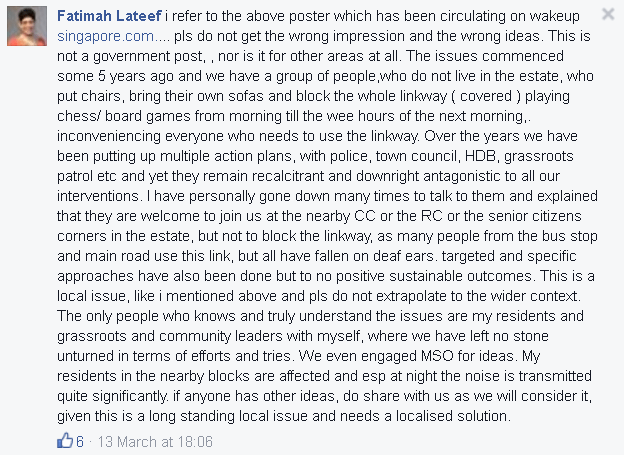 In a comment on her Facebook page, MP for Marine Parade GRC Assoc Prof Fatimah Lateef said that despite taking action with multiple parties like the police, the group has remained “recalcitrant and downright antagonistic to all our interventions”.
She added that her attempts at talking to them personally and suggestions to play their games at nearby Community Centres instead have “fallen on deaf ears” but to no positive sustainable outcomes.
Earlier last month, Tanjong Pagar Town Council was also criticised for installing barriers in the void decks after complaints were received about football being played there. The town council said that football activities apart from causing causing noise, also resulted in dirty walls and damaged light fittings. (read more)
For the full response from MPTC, visit their Facebook page here.