Taiwan’s presidential candidates waded in to a row with China and South Korea on Saturday after a teenage Taiwanese K-pop star was forced to apologise for waving the island’s flag.
A video apology from Chou Tzu-yu, 16, went viral hours after it was posted, with more than three million views
[youtube id=”t57URqSp5Ew” align=”center” mode=”normal”] “There is only one China and the two sides are one,” Chou said in the apology, posted on YouTube by South Korean talent agency, JYP Entertainment.
“As a Chinese person my improper words and behaviour during my activities abroad hurt my company and the feelings of netizens across the strait,” Chou added.
“I have decided to stop my activities in China to seriously reflect on myself.”
Based in South Korea, Chou is a singer with all-girl band TWICE. 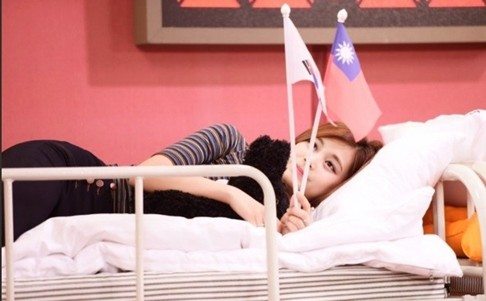 Controversy erupted for Chou recently after Taiwan-born, pro-China singer Huang An drew attention to the segment on Weibo (Twitter equialvent in China) and accused Chou of promoting Taiwanese independence.
He posed a question about whether Chou supports Taiwanese Indepedence and suggested that pro-independent Taiwanese cable TV network, Sanlih E-Television is behind Chou as the channels were supporting Chou for her actions.
Chou was waving the flag of the Republic of China in an online-only segment of South Korean variety show, My Little Television last November.
JYP Entertainment has cancelled her engagements in China until the scandal eases, adding that the company “[feels] extremely regretful about this controversy.”
Taiwan has ruled itself since a split with the Chinese mainland in 1949 after a civil war, but has never formally declared independence.
For a long time, both sides did not conduct any official talks with one another till an important milestone came about, which is the “1992 Consensus”. The meeting between the semi-official representatives of the People’s Republic of China (PRC) Republic of China, Taiwan which recognises there is only one “China” but both sides agree to interpret the meaning of that one China according to their own individual definition.
The ruling party, Kuomintang says that the consensus exists, while the main opposition party, Democratic Progressive Party denies the existence of the 1992 consensus.
But recent comments made by Chinese President and CCP Chairman Xi Jinping, as well as articles appearing in official Chinese media, indicate that the Consensus no longer suffices.
Both Taiwan’s main leadership candidates defended Chou on Saturday as they cast their votes.
“Many have seen Chou’s clip and I believe amny citizens are hurtful, angried. A citizen of the Republic of China to hold a national flag to show one’s who shows her recognition for the country should not be suppressed and should not be forced to say words contrary to one’s intention,” said presidential frontrunner Tsai Ing-wen of the Democratic Progressive Party.

“We will stand forever with friends who support the Taiwanese flag.” said Eric Chu of the ruling Kuomintang (KMT), and condemns the action of JYP along with Huang An.

A statement from the office of current President Ma Ying-jeou of the KMT said he had asked officials to “clarify the roles of the Korean and Chinese sides in this incident and demand they seriously face it”.

Analysts have speculated that the controversy could boost voter turnout. “Any boost to the turnout likely helps Tsai and the DPP, particularly since this has gone viral among young people,” said Clayton Dube of the University of Southern California’s US-China Institute.