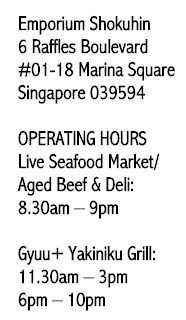 Emporium Shokuhin was opened to great fanfare on level one of Marina Square’s new wing, promising to stand out against the very competitive Japanese restaurants in Singapore. With eight restaurant concepts and a supermarket that promises to ‘sell quality produce at reasonable prices’, we expected a vibrant dining destination, one centred upon the concept of an Emporium.

Historically, the concept of an Emporium in antiquity was supposed to be spaces where you’d find all manners of goods from far-flung corners of the world. They were, essentially, the department store of their times. However, Emporium Shokuhin doesn’t live up to its name. Not even by half.

There is an impressive range of live seafood and aged beef, but they’re unfortunately very isolated from the general dining experience. The live seafood section is going to tank (pun intended), especially since there doesn’t seem to be any attempt at demystifying the ingredients at hand. Those who cook with live seafood already know where to buy their live seafood, and possibly from distributors at a lower price point. You’ll have to tap another market segment: those who are curious but afraid of cooking with live seafood. You’re not going to do that just because some Boston lobsters are swimming lazily in a tank customers can peer into.

There are many synergies that can be derived from a model like this, as we have seen from the success of places like Greenwood Fish Market. Also, consumers definitely want to be involved in the process of dining, from allowing them to choose their own cut of meat, to seeing the ingredients prepared in front of them. Involving them empowers them to think that they will be able to do this at home, and translates to additional revenue for the supermarket as well.

Coming down from the escalator, you’re greeted with the sight of beautiful aged beef – but you can’t eat that at Gyuu, the resident yakiniku restaurant. Why not choose from the live seafood section, and have some grilled seafood/robatayaki? In short, incentivise people to buy the ingredients they like, then usher them into a seating area in which they can enjoy the ingredients that they have chosen.

Rather than a cohesive dining experience that plays to the strengths of the brand, we were confronted with eight disparate restaurants whose menus don’t distinguish themselves, be it through branding or innovative menu choices. When I dined at Gyuu, the cuts were the standard striploin/sirloin/ribeye cuts. No skirt, flank, inner flap, onglet – all perfectly acceptable grilling meats, with the added benefit of being at a lower price point. You’re also able to satisfy a wider group of customers looking for a different dining experience at better prices. The lack of offal was also very odd for a space that spins itself as a hyper-authentic and food-obsessed dining destination – horumon is never too far away in a Japanese Yakiniku restaurant.

Moreover, there are so many Japanese restaurants out there that provide better and more affordable experiences. Singaporeans now demand more from upper-middle range Japanese restaurants, and they should. The dining experience was profoundly disappointing for me and my friend, who left hungry even after spending $50 a person.

The supermarket curation is uninspired and repetitive. I even saw frozen chicken from Latin America there, which was utterly jarring from a branding perspective. It’s like walking into Galeries Lafayette and seeing Malaysian chocolate coins. The miso selection was pretty good, but again, nothing that Meidi-ya doesn’t have. The fruits section filled two small chillers, and the next two chillers saw standard supermarket fare like Driscoli strawberries. Not exactly the expansive variety that was boasted.

There was plenty of PR talk about how this place will import their own stuff, making jabs about how Meidi-ya focuses on household items whilst Shokuhin will focus on food. If they did, I’m not sure I saw any trace of it. Most of the things I recognised are from existing distributors here. Tanesei Trading brings in Saikyo Miso, some of the sakes that were on sale. Eastern Craft brings in the Japanese craft beers that occupy the shelves there. It doesn’t say much if it has, at best, the same range as Meidi-ya when it comes to food options. Emporium Shokuhin has a lot to do before it can sustain itself as a choice dining destination.

E. S. Shankar on murder of Altantuya Shaariibuu and corruption in Malaysia