The latest university ranking exercise by London-based Times Higher Education (THE) has raised questions about the exact composition of local and international students in Singapore universities.

NUS’ position also makes it the top university in Asia, says THE.

Included in the rankings is the number of international students in each university. 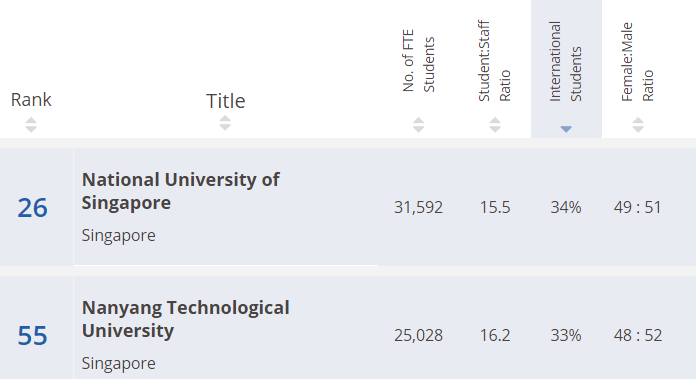 These figures provide interesting insights into the controversial issue of how many places in our tertiary institutions are reserved or opened to non-Singaporean students.

When the then Minister of Education, Heng Swee Keat, was asked in Parliament in July 2013 by Non-constituency Member of Parliament, Yee Jenn Jong, to provide the numbers of international students in our universities, he replied:

“The overall proportion of international students at our local universities is 16 per cent.”

Earlier in May 2013, Mr Yee had also asked for the percentage of enrolled students and admitted students in each of our local autonomous universities (AUs), Yale-NUS College, and Lee Kong Chian School of Medicine respectively, who are Singaporeans, permanent residents and foreigners.

Mr Heng replied to Mr Yee with the following:

“The vast majority of university places have gone to Singaporeans. In AY2012, Singaporean students comprised 79 per cent, while International Students and Permanent Residents comprised 16 per cent and 5per cent of the universities’ intake respectively.”

The figures provided by THE are reportedly submitted to THE by the schools themselves, and represent data from the 2013 academic year, although they may vary from subsequent or earlier years.

While the numbers for Yale-NUS and Lee Kong Chian School of Medicine are likely to have been considered or included in the final tally by THE, the number of international students for these two institutions are a mere 157 and 54 respectively in the year 2013. This would unlikely cause much deviation in the overall number of international students in our universities.

Also, over at Yale-NUS itself, some numbers were revealed through its announcement of student intake, and it points to a somewhat lower proportion of international students there for the 2017 intake.

According to a press release then in 2013, Yale-NUS indicated that Singaporean students would make up 62 per cent of the 2017 cohort:

From the numbers given thus far (from both THE, and Yale-NUS itself), it would seem that the number of international students in each of the three universities highlighted above exceeds the overall 16 per cent of such students as mentioned by Mr Heng in 2013.

TOC has since written to MOE to seek further clarification on the matter.

Speak up for people who are down