A mandate for SG100, but with a compelling vision?

What we have achieved together in Singapore is special. Here many races live in peace, and many from humble homes make good. We will surely meet challenges ahead, but whatever the world throws at us, as one people, we will overcome.”

Election season is finally upon us, and in the short span between the dissolution of Parliament and the President issuing the writ of election, caretaker Prime Minister Lee Hsien Loong had issued yet another call – the first during the National Day Rally just three days ago – for the people to give his People’s Action Party the mandate to continue being the ruling party, not just until the next election, but for the next 50 years.

That is a tall order on any government, and I dare say that in any other part of the world, no democratically elected government would even dare ask for such a mandate – not because they do not have the capacity to fulfill the promise, but because they recognise that parties change, the interest of the people change, and the entire environment in which the nation resides changes.

Clearly, only in Singapore where the PAP has ruled for such a long time that such thoughts can be entertained. It is endemic of an insulated and inward-looking mindset, a far cry from the international perspective that Lee himself espoused at the National Day Rally. It smacks of hubris, and suggests a “we have done it before so surely we can do it again” mentality.

By all counts, this request by Lee is unfair on voters, as much as it is patronising. It is akin to them signing a blank check for a government to do whatever it wants in its new term in office, possibly sacrificing the needs and concerns of today for a long-term goal that the elected government only need to, at best, justify its actions, not regularly seek the people’s consensus. The response is rhetorical – who does not want a better future? – but also exhaustingly self-sacrificial – what wouldn’t I give for a good future?

But let’s assume that we do buy into this “SG100” long-term goal ideal. The two key questions then would be, has the PAP proved its mettle to be able to promise the next 50 years of governing Singapore well, and what is this future vision that the PAP is asking us to vote on? 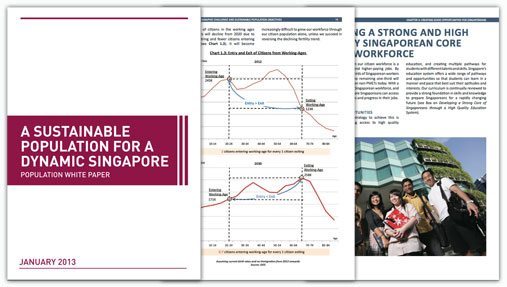 Looking back – the PAP’s track record

If we were to take the National Day Rally as the PAP’s first election rally for GE2015, then it would make sense to for us to seriously reflect on the rally as a case in point for Lee to prove his party’s worth. In fact, Lee had said exactly the same thing during the Rally – “You will be choosing the team who will be working with you for the next 15-20 years. You will be setting the direction for Singapore for the next 50 years. You will be determining the future for Singapore”.

What is the proven track record for his party? National defence, which is undoubtedly as good as the highest spending nation in the region can buy, even as pay for National Service conscripts remain dismal. Racial and religious harmony, although some might say that it is at best tolerance, as there is no true harmony without frank and open dialogue. A seat at international forums, and granted this is no mean feat for a small nation. Education, and to its credit the PAP has depended much on pioneers like Dr Tay Eng Soon to pave the way for technical education. Marina Bay, as if that alone can be the jewel of all PAP’s achievements.

But the situation is becoming increasingly less clear. Lee cites the new campus for the Singapore Institute of Technology, but there is little to believe that it would not embark on the same path that Singapore’s education system has been going on for years – continual upgrading for unassured jobs, and industry partnership. In fact, it’s citing in Punggol 21 (or 21+, 21 A+, whatever suits your fancy, Punggol residents don’t really care anymore) points to a lack of far-sightedness in PAP when it comes to land use: Plotting and plugging any available space, a far cry from the original concept for Punggol 21. Will we be looking at developing new unique education pathways and industries that will make Singapore unique and in-demand in the world? Hardly.

The same temporariness can be seen in all the other aspects of Lee’s Rally speech. Building homes stood out as a sore point, and it is increasingly obvious that the PAP has no long-term solution of managing the currently over-inflated cost of public housing. We see suggestions of a PAP hobbling along with policy tweaks, fearful of biting the bullet that would unwind the “assent enhancement” mantra and bring property prices down to a truly affordable level.

And it would hardly be too harsh to say that Lee’s take on the immigration issue was a complete cop-out:

“It is a very sensitive matter, not an easy thing to talk about, even at the National Day Rally and Singaporeans understandably have strong views about it. The Government has heard them, we have adjusted our policies, upgraded our infrastructure, slowed down the inflow of foreign workers, tightened up on PR and citizenships applications, made sure that Singaporeans are fairly treated at work. But on foreigners and immigration, there are no easy choices…But I believe that I am doing what Singapore needs and what best safeguards your interest. If I did not believe that, I would not be doing it.”

Organic population growth, retirement funds, retirement age, “universal” healthcare – we see in all of these the mode of operation that PAP has been going on for the past 10 years or so: Plug the gap, wait for the next leak, plug it again, we might need to explain this or that, but trust us we are on the right path. Really?

This “tahan” (Malay, meaning “to withstand” or “hold back”) mentality hardly speaks well of a political party that is now asking you for a mandate to serve you for the next 50 years. In fact, Singaporeans would now be hard pressed to see how the PAP can have the ideals and ideas to serve the nation for the next five years, much less peddle any “vision” to last us for another 50. Unless Lee hopes to convince us that we should build more Marina Bays.

At this point, challengers would ask: But what can opposition parties do in asking us for their vote? To begin, no opposition party has thus far stated that they have a clear vision for the next 50 years. This is actually normal in politics as it is in government, as mentioned earlier. However, we see some strong ideals coming from our opposition parties – democracy and democratic systems, egalitarianism and social justice, Singaporeans first, transparency and accountability, free economy and free society, substantive wages, meaningful employment. We might not agree with all of these ideals, but there is a flickering of a vision there, and it is up to citizens to find out more about the party contesting in their ward, and challenge their worth.

We also see some reasonable ideas, in terms of policy proposals and articles that various parties have published. They might not be watertight, but we also sense much humility from opposition leaders – they acknowledged that they do not have all the solutions, but are eager to work with the PAP for the best policies that serve citizens, rather than draw party lines. Democratic Progressive Party’s Benjamin Pwee had recently called this “collaborative government”, and it was clear that many party leaders echo his views.

The PAP, on the other hand, has no clear ideals for us to challenge, apart for a “we will handle the problem when it comes” mentality. But this becomes a temporary solution for policy-making, not a vision. It is about debating ideas, assuming the PAP would even allow us to debate them.

What vision, then, is Lee Hsien Loong asking us to give his party a mandate on? We might yet find out, of course. Lee still has the next 17 days to tell us, even if he has not done so for the past four years. As he might have once famously said, it is merely a “communication problem”. Sure.

For just US$7.50 a month, sign up as a subscriber on The Online Citizen Asia (and enjoy ads-free experience on our site) to support our mission to transform TOC into an alternative mainstream press.
Tags: featuredGE2015Lee Hsien LoongPAP

A mandate for SG100, but with a compelling vision?