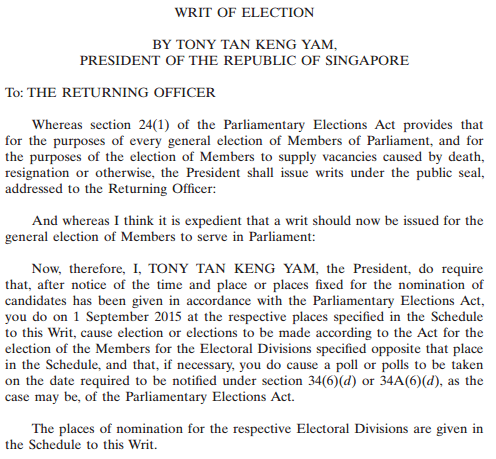 Following the dissolving of parliament, President of Singapore, Mr Tony Tan Keng Yam issued the writ of election at 4pm today, stating that Nomination Day will be on 1st September 2015, Tuesday.

According to the law, 11 September will be made a public holiday.

The parliament was just dissolved by Mr Tan at 3pm.

This will be the 13th General Election to be held in Singapore.

A total of 13 Single Member Constituency and 16 Group Representation Constituency would be contested in the upcoming General Election with a total of  89 Parliamentary seats up for grabs.

10 political parties will be taking part in the election and there is expected to be no walkovers.

There are currently 3 constituencies held by the opposition Workers’ Party.

The parliament is dissolved exactly one month after the Electoral Boundary Review Committee released the modified electoral map on 24 July.