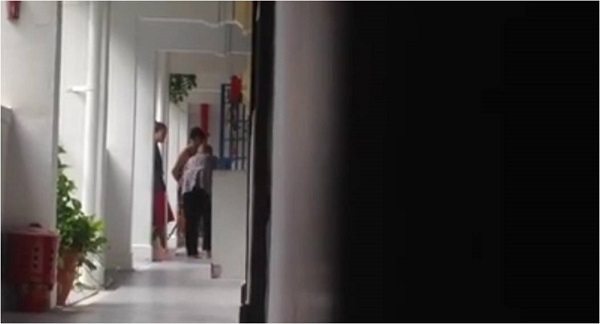 The Ministry of Social and Family Development (MSF) says it is looking into the incident of an elderly woman being slapped by a younger woman outside a flat in Lower Delta Road.

“Please be assured that the elderly woman’s safety is our priority,” the ministry said in a posting on its Facebook page on Monday at about 10pm, after a video of the incident had gone viral.

The Online Citizen (TOC) understands that the MSF’s Adult Protection Service was informed and had  acted shortly after.

The person who secretly recorded the incident on video and later posted it online provided an update on his Facebook page on Monday night as well:

“Police officer were seen [going] to that makcik unit..the makcik was taken to hospital with bandaged head..the young lady was taken into custody to assisst in the investigation…”

The video had gone viral online and has been viewed more than 300,000 times in just a few hours.

As TOC reported, the elderly and frail woman was sweeping the floor outside her flat, watched over by two other younger women.

At one point, the two women appeared to be scolding the elderly woman, and one of them slapped the latter several times on the face.

The elderly woman appeared unsteady at this point and seemed to be trying to find her balance.

Many reacted with indignation and disbelief at how the old woman was treated, and called for the authorities to step in.

In 2014, the Straits Times reported that “social workers are seeing a growing number of cases of vulnerable adults being mistreated by their own loved ones – usually grown-up children who should be caring for them.”

“Several hundred such cases surface here each year,” the report said, adding that these cases include the vulnerable, such as the disabled and mentally ill.

The number of such cases, the newspaper said, citing social workers, “may well be the tip of the iceberg.”

At the moment, social workers do not have the authority to step in if they should encounter such cases of abuse.

“As we look forward to the future, we know that the number of elderly will be increasing rapidly and by 2030, we may have up to 900,000 elderly,” the then Minister of MSF, Chan Chun Sing, told the media in October last year.

“We are concerned that in time to come there might be increasing number of vulnerable adults who are not able to care for themselves or people who are unable to make judgement for their own well-being.”

This is why the Government has said it will  be introducing the Vulnerable Adults Act (VAA) by the end of this year to empower social workers and others to step in and remove such vulnerable victims from abuse or self-harm.

When the law, which will protect the vulnerable aged 18 and above, comes into force, “social workers and other professionals will get the powers to enter the house of a suspected victim to assess the situation and remove him to safety if necessary”, reports the Straits Times.

“We will have the powers to conduct social investigations, enter homes and possibly relocate vulnerable adults to places of safety, if necessary,” Mr Chan told Parliament in March this year. (See here.)

“We will enable the application to court for intervention orders to help those in need,” he explained. “Family members can also apply to court for some of these orders. And MSF will build the capability to perform these statutory functions under the Vulnerable Adults Act.”

Mr Chan said the new Act will complement the Mental Capacity Act, which will also be updated and amended in the later part of this year.

However, he also said that the law should be used only as a last resort.

“[We] hope most of these cases can be resolved amicably without using the Act as a last resort,” he said. “We must also respect the individual’s right to self-determination; and this Act must not replace other Acts.”

“We will need to work together to develop a common understanding of when we should intervene and what sort of intervention we must do together,” he said.