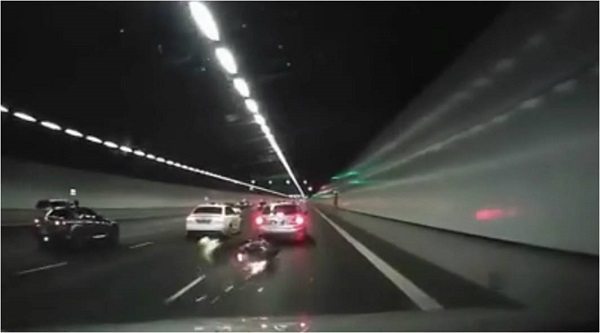 A video of an incident, which is believed to have occurred on the Marina Coastal Expressway (MCE), is making its way online, after the brother of one of those involved in the incident posted it on his Facebook page.

A motorcyclist had been riding with his wife as pillion on the MCE sometime last week when the car in front of them suddenly jammed on its brakes for no apparent reason, causing the motorcycle which was behind it to crash into it.

In the video, both riders could be seen being thrown off their motorcycle.

Instead of stopping, however, the driver of the Toyota car drove off.

Mr Syahdirwan Jumari, brother of the motorcyclist, posted the following on his Facebook page on Sunday, 12 July, asking for eyewitness to identify the car driver:

“My brother and his wife met into an accident a few days back, a cut-short video has been circulating around. This is the full video of the incident. Toyota driver is still unknown. To anyone who witnessed this accident or have any information please PM me straight. Thank you!! Your help is highly appreciated.”

Watch the video of the incident here: