The Wall Street Journal (WSJ), in an expose of what it said was illegal funds transfers into the personal bank accounts of Malaysian Prime Minister Naib Razak, named a bank in Singapore which made the transfers.

The WSj said that on 21 and 23 March 2013, two tranches of a total of US$681 million were transferred from Falcon Private Bank in Singapore. 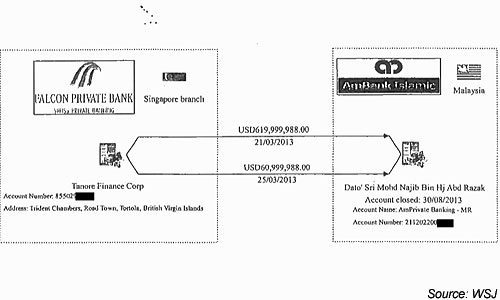 The bank describes itself as a “Swiss private banking boutique” with 50 years of expertise in wealth management and employs over 300 people.

“We provide first-class financial services to private clients and wealthy families from our headquarters in Zurich and our branches and representative offices in Geneva, London, Singapore, Abu Dhabi and Dubai,” it says.

Formerly known as AIG Private Bank AG, it changed its name in 2009 to its current one.

Its Singapore branch is located at 3 Temasek Avenue.

Together with its subsidiaries, the bank offers investment funds and mutual funds, and provides “private banking and wealth management services to high net worth private clients, institutional clients, external asset managers, and private label partners worldwide,” according to Bloomberg.

According to the Sarawak Report, which had first alleged the transfers to Mr Razak, the transfers were made “by Falcon Bank’s Singapore branch to Najib Razak’s personal account just days before the Prime Minister called the last election…”

In the second case of alleged corruption, Thailand’s Prime Minister, Prayut Chan-o-cha and his wife are being accused of transferring “tens of billions of baht to Singapore”.

Gen Prayut, however, has denied the allegations.

“If I had that amount of money, why would I have to stand here?” he said.

He has also launched an investigation into how the rumours started.

Gen Prayut says he was informed that the rumours initiated from Thammasat University which has been in the news recently after students held protests calling for the release of 14 students who were themselves detained over anti-junta protests.