Besides a march past displaying the SAF colours, this year’s parade highlights comprised a special heli-flypast of the national flag as well as an aerial flypast of fighter planes.

Chief of Defence Force Lieutenant-General Ng Chee Meng led SAF personnel in reciting the SAF pledge to reaffirm their loyalty to the country and their commitment to the defence of Singapore.

A minute of silence was observed in remembrance of SAF personnel who had lost their lives in the line of duty.

Dr Ng also presented the SAF NSman of the Year awards to 16 NSmen during the post-parade reception. 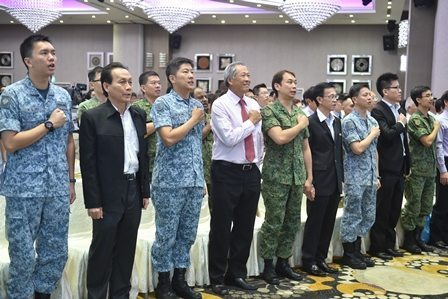 Earlier today, more than 650 NSmen from 354 companies and their employers gathered for the SAF Day combined rededication ceremonies held at four locations around Singapore to reaffirm their commitment to the defence of Singapore.

Dr Ng officiated at the rededication ceremony held at SAFRA Toa Payoh, where he delivered the SAF Day message to remind Singaporeans of the importance of a strong and capable SAF to protect the nation’s sovereignty and our way of life.

He said, “A strong SAF has been built by the sweat and toil of successive generations of men and women. A new generation must now continue this task of keeping the SAF strong, committed,capable and able to deal with new and more complex security threats. The SAF must build new capabilities, strengthen our networks and fight as an integrated force. We will have to constantly challenge our thinking, innovate and be able to do more against the odds.”

Dr Ng also thanked the SAF personnel for their dedication in protecting the country and the community for their support towards the SAF and National Service. Pledge Leader for the ceremony CPT(NS) Joshua Lim, who led 112 NSmen in the recitation of the SAF pledge, said that the rededication ceremony was an opportune time for NSmen to reflect on their roles in the defence of Singapore.

The officer-in-charge from 819 Squadron, Air Defence Operations Command, added, “As Singapore celebrates SG50 this year, it is important for us to recognise the contributions of the SAF which has played a vital role in the success of Singapore. I am indeed heartened by the efforts of not just the NSmen, but also employers with accommodative employment policies. This, most definitely, helps NSmen like me to actively balance work, family and national service commitments. I am proud to serve my country and honoured that I am part of this ceremony.” 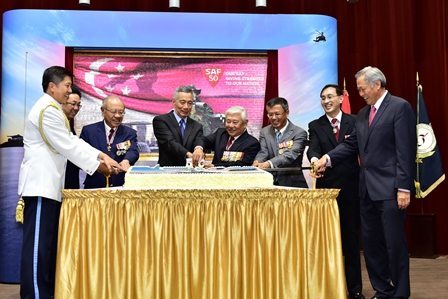