BCA questioned on narrow corridors at Pasir Ris ONE “How could the Building and Construction Authority have approved the plans if neighbours cannot open their doors at the same time,” Mr Leong Kok Seng asked in his letter to the Straits Times forum page on Saturday.

“This will be a problem if there is a fire, as the evacuation of people will be delayed,” he said.

Mr Leong was referring to recent reports of the narrow corridors of the flats under the Design, Build and Sell Scheme (DBSS) at Pasir Ris ONE.

Residents there had only received their keys to the new flats recently and discovered that the corridors were only 1.2m wide, which is the bare minimum required under the Building and Construction Authority (BCA) and Singapore Civil Defence Force (SCDF) rules.

The rules say that there must be “a minimum clear escape passage of 1.2m clearance is to be maintained” in the corridors.

“It’s enough of a squeeze that two people might have trouble walking side by side,” said one resident to the press. “This could be a serious safety hazard in the event of emergencies.”

Despite the complaints and concerns, however, the developers, SingHaiyi Group and Kay Lim Holdings, said Pasir Ris ONE was build within the guidelines.

“The designs and plans for this development have been approved and fall within all guidelines stipulated by the BCA, which were established with safety and comfort of residents in mind,” the manager and project administrator from SingHaiyi Group told the Straits Times.

When The Online Citizen (TOC) visited the development on Monday and measured the width of the corridor, it was precisely 1.2m wide. 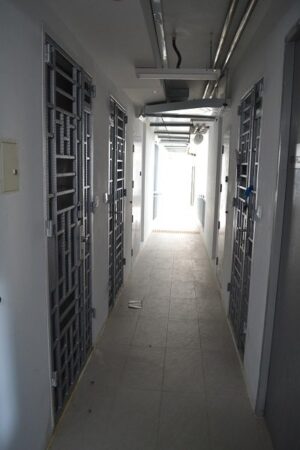 However, since then, follow-up reports have been done by others, including Chinese newspaper Shin Min Daily.

It said that its measurement found that the corridors were in fact just 1.17m wide, which would mean they do not fall within the guidelines.

On Thursday, the Housing and Development Board (HDB) said it is “closely monitoring the progress” of discussions between itself and the developers over the residents’ many complaints about Pasir Ris ONE.

The BCA, meanwhile, has been silent on the issue.

The BCA is a statutory board under the Ministry of National Development which is helmed by Minister Khaw Boon Wan.

Mr Khaw said on Tuesday that homeowners can send their feedback to MND and the HDB, and they would see if they could assist homeowners after looking into the cases.

Mr Leong said, “A width of 1.2m for a corridor may be acceptable if there are no obstructions, and if neighbours can open their doors at the same time.”

“However, this is not the case for this development,” he said. “I am concerned that the designs and plans of Pasir Ris One, with 1.2m-wide corridors, fall within guidelines and have been approved.”